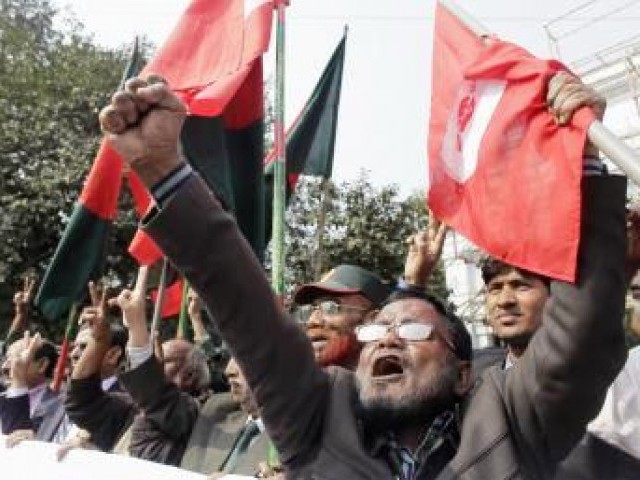 A file photo of protesters in Bangladesh. PHOTO: REUTERS

DHAKA: Bangladesh has widened a crackdown on allegedly blasphemous blogs after a threat by Islamic groups to march to the capital demanding the prosecution of atheist bloggers, an official said Wednesday.

The telecommunications regulator ordered two leading Internet sites to remove hundreds of posts by seven bloggers whose writings it said offended Muslims, according to its assistant director Rahman Khan.

“These writings have defamed Islam and the Prophet Mohammed (pbuh). The two sites have removed most of the posts,” Khan told AFP.

Khan said the regulator was scrutinising other sites to identify and erase “blasphemous blogs” in an attempt to ensure religious harmony in the mainly Muslim nation.

The move comes after Islamic groups and clerics, who have staged a series of deadly protests against atheist bloggers in recent weeks, threatened to march en masse to Dhaka on April 6 unless the bloggers are prosecuted.

The debate between militant atheists and fundamentalists has been a popular subject in Bangladesh’s blogosphere and on social media for years, but it took a deadly turn last month when an alleged anti-Islam blogger was murdered.

The government has blocked about a dozen websites and blogs to stem the anti-blasphemy violence that left eight people dead. It also set up a panel, which included intelligence chiefs, to snoop for blasphemy in the social media.

A blogger said 120 of his posts had been erased from one of the websites. “The government is targeting the bloggers to appease the Islamic groups”, said the blogger, who identifies himself as a militant atheist, told AFP.

The blogger, who was critically injured in a machete attack by protesters in January, said he was interrogated by detectives this week about his writings.

“It’s a serious attack on freedom of speech,” he said.