Book review: How It Happened - floored by Fatima!

Book review: How It Happened - floored by Fatima!

For many the story might seem ordina­ry but render­ing it into a deligh­tful funny book is quite a task.
Sunday Magazine Feature
By Sadaf Pervez
Published: January 27, 2013
Tweet Email 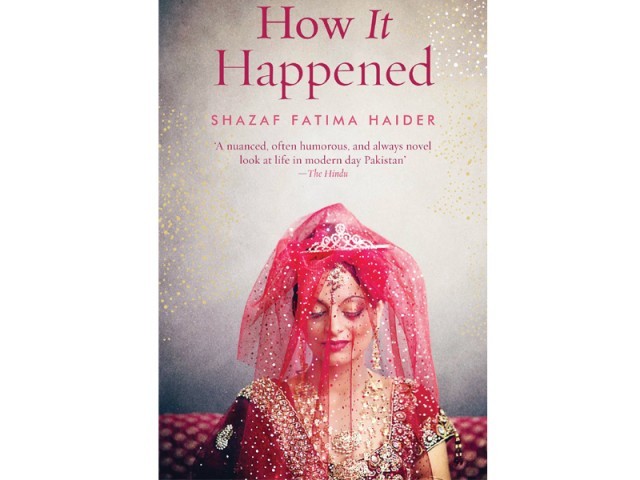 It is said that a good novel is a story of transformation. In such a novel, the protagonists are tumbled together. The reader should be able to swerve along with its drama as the story unfolds.

Following the same style, the novel How It Happened by first-time author Shazaf Fatima Haider gives a delightful and humourous take on the difficulties in simultaneously accepting the values of the varied and mostly incoherent groups in our society. Here the old order, with its belief in ‘spices, prayers and arranged marriages’ is passing with time, though it’s not going quietly into that good night.

Qurrat Dadi is a staunch believer in the ‘philosophy of a greater romance in arranged marriages than in the irrational immortality of love marriages’. Over the years, Dadi expects her grandchildren to be obedient so as to avoid the stigma of love marriage blackening the name of the prodigiously chaste family. Such is the worldview of the matriarch of the Bandian clan of Bhakuraj. Respecting Dadi’s ideologies, Haroon, the apple of her eye, agrees to roam from one drawing room to another. But fate leads him to Saima, a Shia-Syed co-worker in his office.

Falling woefully short of the expectations of her family traditions, Haroon’s sister Zeba has to face the wrath of Dadi after being caught dating a Sunni man. Zeba, who is very picky, is quite against the time-honoured traditions that Dadi loves to uphold. She agrees to the customary act of meeting suitors in the drawing room for Dadi’s sake but it is certainly not pleasant to them. Dadi is the queen of drama, wiping tears and fainting as the others try to act as negotiators. As Zeba crosses the age of twenty six, Dadi cannot stand to see her family counterpart and rival boasting about marrying off her granddaughter first. Amidst all the drama is Fati Phupps, the only person of whom Dadi is scared, though only a little, and the only voice of reason in the family.

On the sidelines is 15-year-old Saleha, the narrator of the book. By narrating from the youngest sibling’s view, the author uses Saleha’s sensitivities about negotiating with old traditions and her eavesdropping to move the plot forward. Fatima’s sparkling humour is evident and the readers will soon fall in love with the characters.

For many the story might seem ordinary but rendering it into a delightful funny book is quite a task and Fatima certainly pulls it off with aplomb and more than a few belly-laughs.