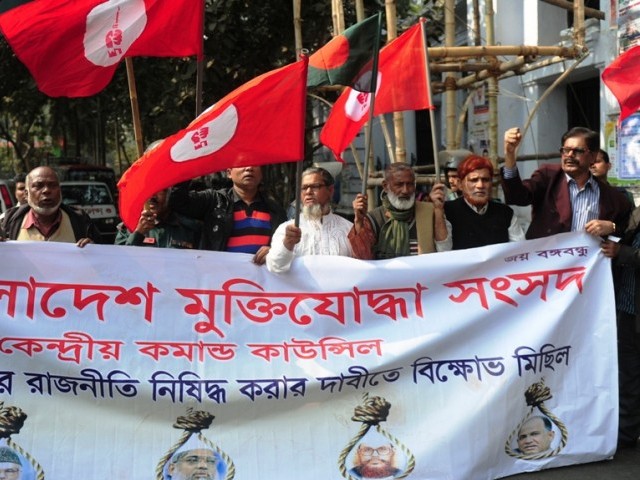 Activists and former freedom fighters who fought in the 1971 war demonstrate outside the International Crimes Tribunal court premises in Dhaka. PHOTO: AFP

Maolana Abul Kalam Azad, who has been on the run for the last year, was “sentenced to death by hanging” for genocide and murder committed during the 1971 liberation war, judge Obaidul Hasan announced.

The International Crimes Tribunal (ICT), which is a domestic tribunal with no international oversight, was created by the government in 2010 and has been tainted by allegations that it is politically motivated.

“It’s a historic day for the country. It’s victory for the humanity. Bangladeshi people have been waiting for this day. They can now heave a sigh of relief since 1971,” said Attorney General Mahbubey Alam.

Azad, 63, who for years presented a widely watched show on Islam on private and state-run television channels, is a former leading light of Bangladesh’s largest opposition Islamic party Jamaat-e-Islami.

Both Jamaat and BNP have called the cases “politically motivated and farcical” and international rights groups have questioned the proceedings and found loopholes in the war crime laws.

“He was not involved in any of these crimes and was never named a collaborator in any of the war books,” he told AFP.

Prosecutor Shahidur Rahman told AFP that Azad became known as “Bachchu the collaborator” during the war in his home town in the southwestern district of Faridpur, where he was accused of murdering at least a dozen Hindus.

“Six of them he shot dead himself and took part in a genocide,” Rahman said.

In the 1980s Azad became a regular speaker at a top mosque in Dhaka. His TV shows are said to have helped shape the Muslim-majority country’s sufi-inspired Islam to that of the more austere Saudi-style Islam.

Azad, who also heads an Islamic charity, went into hiding and is believed to have fled the country immediately after the tribunal opened the case against him.

Bangladesh, which was called East Pakistan until 1971, has struggled to come to terms with its violent birth.

The current government says up to three million people were killed in the war, many murdered by locals including allegedly by the members of Jamaat.

The administration of Prime Minister Sheikh Hasina established the tribunal in March 2010 to try the collaborators, but is has since been hit by a series of controversies.

Last month a presiding judge resigned after his leaked Internet calls showed that he was under pressure from the government to deliver a quick judgement, raising further questions about the fairness of the trials.

The government says the trials are fair and meet international standards.