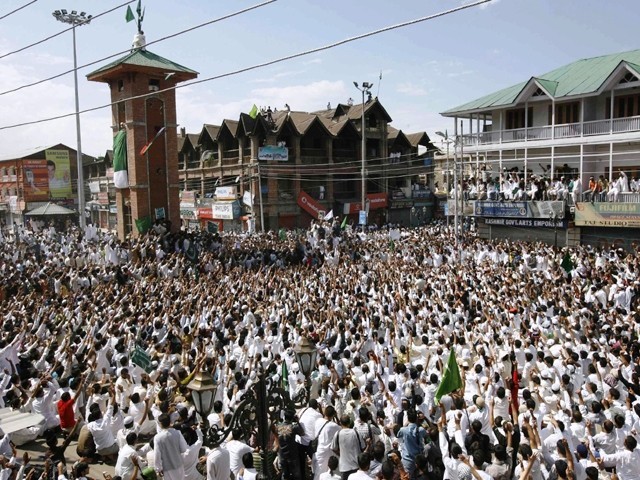 NEW DELHI: About two thirds of residents in India Kashmir want independence for their region, with less than one in ten seeking a merger with Pakistan, a survey showed Sunday.

The poll, conducted for the Sunday Hindustan Times newspaper, showed that 66 per cent of respondents in the Kashmir valley wanted “complete freedom to entire Jammu and Kashmir as a new country.”

Only six per cent in Kashmir wanted a “complete merger of the entire Jammu and Kashmir in Pakistan.”

The desire for independence for the state is not shared in the Jammu and Ladakh parts however, where 76 per cent and 70 per cent wanted a “complete merger” of the state into India.

Respondents were also asked who was to blame for a current wave of unrest in the Kashmir area where young stone-throwers have clashed with security forces for the last three months.

Seventy protesters and bystanders, some children, have been killed, mostly by security forces who have fired on demonstrations.

In Kashmir, 56 per cent blamed India for the unrest, while 44 per cent of those asked in the “rest of India” thought Pakistan was responsible for stirring up trouble.

Majorities in all areas concurred that Indian forces should not use bullets against protesters, with 96 per cent saying it was wrong in Kashmir, and 85 per cent in the rest of India.

Two thirds thought it was wrong in Jammu, while 31 per cent said it was acceptable.

The poll was conducted by Team CVoter and canvassed 2,369 people.

On Sunday, Indian security forces enforced a strict curfew in much of Kashmir, after protests erupted on the first day of Eid.

Thousands, including women and children, marched through the city and held demonstrations at its historic business centre.

Protesters hoisted green Islamic and Pakistani flags atop a clock tower and later police blamed them for setting fire to a government building that housed the offices of the force’s crime branch and power development department.

Separatists, who led Saturday’s protests, blamed “anti-movement elements” for setting fire to the building and called for a probe into the arson.

Police said they had imposed a curfew on Sunday to prevent further violence.