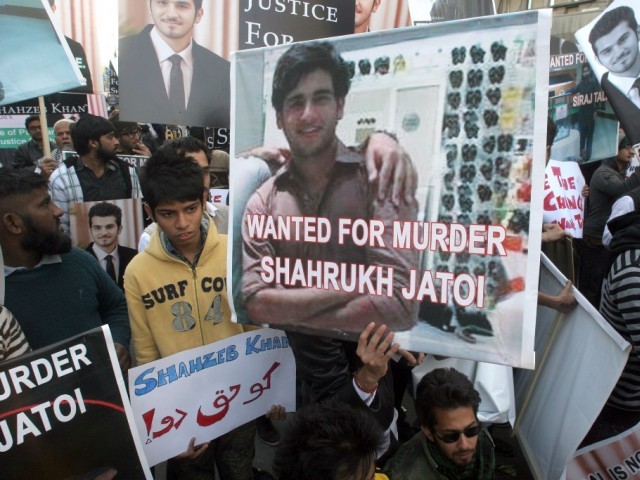 Students and members of civil society chant slogans during a demonstration outside Karachi Press Club against the killing of Shahzeb Khan. PHOTO: ATHAR KHAN/ THE EXPRESS TRIBUNE

Shahrukh Jatoi, the prime suspect in Shahzeb Khan’s murder had, according to earlier reports, fled to the UAE on December 27.

The documents taken from Shahrukh Jatoi’s father pertaining to his travel have revealed that he is still in Pakistan, the FIA source said.

According to the source, the documents saying he had gone to the UAE were fake.

Raids have been conducted in Karachi and Islamabad but no one has been caught yet, suggesting that the perpetrators might be tipped off.

Shahrukh Jatoi is wanted for allegedly gunning down 20-year-old Shahzeb over a small argument.

Both Shahrukh Jatoi and Siraj Talpur are wanted by the police as they are the prime suspects in the case.

The Supreme Court took suo motu notice of the case after the news spread that influential people were creating hurdles in their arrest.

In its first hearing, the police were ordered to arrest the suspects within 24 hours or risk losing their jobs.