Young Dutch invent­or hopes device can help save thousa­nds of lives and limbs in his native Afghan­istan.
By AFP
Published: January 4, 2013
Tweet Email 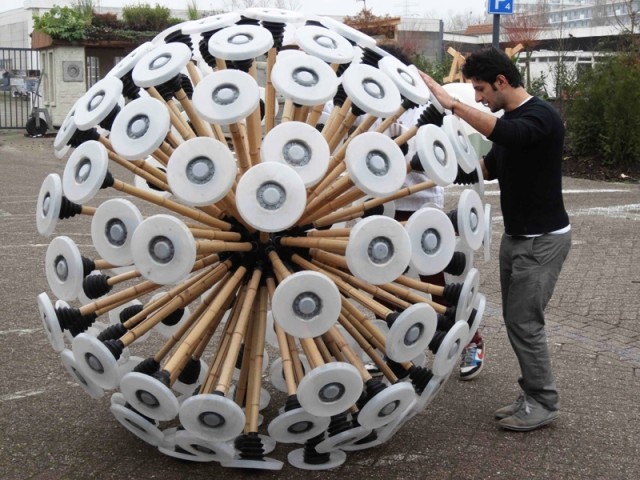 In this picture taken on December 19, 2012 Dutch brothers of Afghan origin Massoud (R) and Mahmud Hassani (L behind round structure) push the 'mine kafon'. PHOTO: AFP

EINDHOVEN: Childhood toys lost in a war-torn field have inspired an odd-looking invention which its young Dutch inventor hopes can help save thousands of lives and limbs in his native Afghanistan.

Decades of war, notably the 1979-89 Soviet invasion, have left the rugged Afghan countryside littered with landmines that continue to exact a merciless toll, mainly on children.

Now, in a small workshop in the industrial heart of the southern city of Eindhoven, 29-year-old Massoud Hassani screws in the last leg of an ingenious, wind-driven gadget he built to clear anti-personnel mines. He calls the device, the size of a golf buggy, a “mine kafon”.

“The idea comes from our childhood toys which we once played with as kids on the outskirts of Kabul,” Hassani told AFP as he rolled out the device for a demonstration.

Short for “kafondan”, which in Hassani’s native Dari language means “something that explodes”, the kafon consists of 150 bamboo legs screwed into a central metal ball.

At the other end of each leg, a round, white plastic disk the size of a small frisbee is attached via a black rubber car part for drive shafts, called a CV-joint boot.

Assembled, the spherical kafon looks like a giant tumbleweed or seed head. And like the dandelion puff it moves with the wind: the kafon is designed to be blown around, exploding anti-personnel mines as it rolls on the ground.

With the legs made from bamboo, they are easily replaceable. Once they are blown off it’s simply a matter of screwing on others, which means the kafon can be used over and over.

Inside the steel ball, a GPS device plots the kafon’s path as it rolls through an area that may be mined and shows on a computerised map exactly where it is safe to walk.

Hassini is still in the testing stages, notably to make sure there is 100 percent contact between the kafon’s “feet” and the ground, so no mine is missed.

But initial trials – some using explosives with the Dutch Defence Force – and an in-the-field rolling test in Morocco this year showed promising results.

“We know this is a working prototype and that we need to do lots of testing still,” said Hassani, saying the kafon would not be deployed in real situations until it was 100-percent proven.

The designer and his brother Mahmud, 27, are now looking for sponsors, notably through an online platform. They hope to raise 123,000 euros (160,000 dollars) in donations by next month to fund development and take the device to Afghanistan in August for more trials.

It will be the brothers’ first time home after fleeing Taliban-ruled Kabul, Massoud first in 1998 then Mahmud two years later, in arduous treks through Pakistan and Uzbekistan. They finally made their way to the Netherlands, where they were accepted as refugees and today hold Dutch citizenship.

Massoud landed a place at the Design Academy Eindhoven – regarded as one of the world’s foremost industrial design schools – where he first conceived the project in 2010.

“I had to design a toy from my childhood,” said the shaggy-haired inventor as he sipped a cup of tea.

“I went back into my childhood in a dream. I saw the toys we made and how they rolled into a minefield,” he told AFP. “We could never get them back.”

Despite huge progress in mine-clearing in Afghanistan in recent years, it remains one of the most-mined countries in the world.

Since 1989, around 650,000 anti-personnel mines, 27,000 anti-tank mines and more than 15 million other pieces of unexploded ordnance have been collected, according to the UN-funded Mine Action Coordination Centre of Afghanistan (MACCA).

More than half of the victims were children, it said.

“People are killed almost daily in my home country – and tragically it’s often kids, like what happened on Monday,” said Hassani, eyes clouded with painful memories from his own childhood.

His reference was to a December 17 tragedy when 10 Afghan girls collecting firewood were blown apart in the country’s east after one accidentally struck a mine with an axe.

“There is no silver bullet to solve all the problems associated with mine clearing,” conceded Mary Wareham, a senior advisor at Human Rights Watch Arms Division. But “we appreciate every effort,” including the kafon’s invention, she told AFP.

For Hassani, his gadget is more than just a new way to fight a deadly scourge.

“This,” he said, “will be our revenge on the war that has torn up our country.”

Buildup to MFN: Indo-Pak trade through Attari on the upswing