Up against sardars: First woman to contest elections from Ghotki

Up against sardars: First woman to contest elections from Ghotki 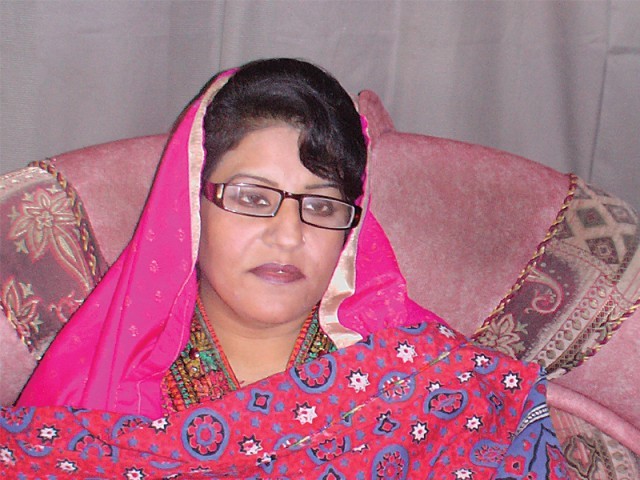 PML-N’s Raheela Shar said the media is prevented from covering her political activities.

GHOTKI: In an area where sardars boast of male domination, Raheela Shar is all set to become the first woman in the history of Ghotki to contest elections.

Shar, presently the district president of the Pakistan Muslim League-Nawaz’s (PML-N) women wing, is preparing herself to compete with Ghotki’s traditional sardars for the National Assembly (NA)-200 constituency. Though the PML-N has yet to select her officially as the party’s candidate from NA-200, Shar is the only candidate willing to participate in the elections against the sardars.

Despite the presence of a large number of political families, not a single female member of these powerhouses has ever been part of the national or provincial assemblies.

Raja Mujeeb, a social activist who focuses on violence against women, had said earlier that the ‘sardar culture’ poses a hurdle. “You can see two or four sardars in a district but we have 12 sardars. They dominate politics. They do not support their own women to participate in politics, then how can they encourage others? I do not see how any of them can break this barrier.”

A mother of five daughters, Shar observed that karo-kari and lack of facilities for education and health are some of the pressing issues in this area. “The chief of different tribes have been in power for several years but they are not serious to resolve these basic issues and to bring any visible changes in Ghotki,” she said.

Entering politics has not been easy for Shar. “They [Sardars] even stop media persons from covering my political activities,” she told daily Sindh Express. Shar believed that only women can make her success possible.

An official said that after Mitho’s alleged involvement in the famous conversion case of Rinkle Kumari, the PPP will not give him a ticket from this constituency. He added that Mitho will be contesting as an independent candidate against PPP’s likely candidate, Khalid Ahmed Lund. Mitho’s supporters claimed that he has carried out several development works and will easily defeat any candidate.

After the Sindh Peoples Local Government Act, the support for the PML-F has also increased, and the party’s Pir Abdul Khalique of Bhurchundi Sharif is expected to give tough competition to the PPP candidate.

Pakistan Tehreek-i-Insaaf’s Ghulam Rasool Farooqui will contest from this constituency. “Lund will learn how to contest the elections now,” Farooqui said. “He abandoned the people during the floods.”

Another important candidate that Shar will have to look out for is Sardar Taj Muhammad Domki, the provincial president of PPP-Shaheed Bhutto. Domki is also the tribal chief of Gabol, Gadani and Golato tribes.

Sardar Sher Yar Shar of the National Peoples Party is another strong candidate, who is sure that the PTI and PML-F will support him against the PPP candidate. Since there is a lack of political alliance among the opposition parties, Lund appears to be the strongest candidate so far. If parties, such as PML-N, PML-F, PTI, National Peoples Party and Jamiat-e-Ulema-e-Pakistan, formulate a strategy and agree on a joint candidate, they can give Lund a tough time in the upcoming polls.

The following candidates are likely to contest from NA-200: