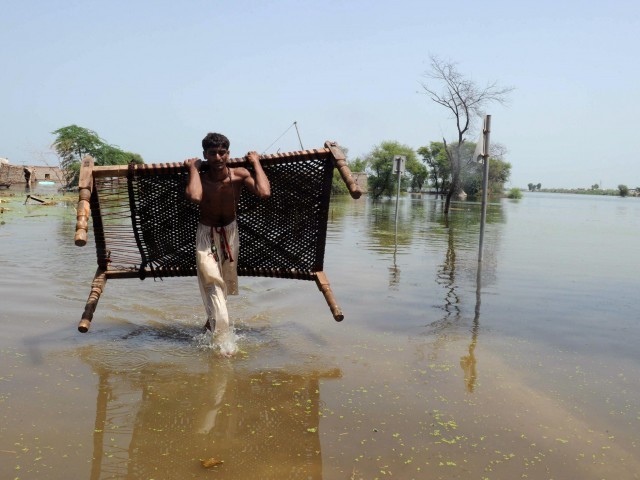 A view of one of the flood areas. PHOTO: AFP

RAJANPUR: With 1.3 million people displaced by the floods, Rajanpur has been the hardest hit district in the province but aid workers and government officials say the district has not received due media coverage. Media attention, they believe, could have boosted aid flow.

“We are short of tents and food. Many people are still trapped in villages turned into small islands by the waters of the Indus,” Mohammed Usman, a retired military officer and the Rajanpur district administrator, tells IRIN. He says that the area needs 120,000 more tents immediately.

Even if the district administration arranges funds, local suppliers cannot keep up with demand for tents.

“The supply of tents in Pakistan is not sufficient to cope with the demand,” says Saleem Rehmat, an official of the International Organisation for Migration (IOM).

He says that only 1.3 million people, out of the 8.5 million in urgent need of shelter, have been accommodated so far.

Though the supply has paced up, he says, to three flights every day, it will only be enough for 2.5 million people, still leaving about 4.7 million without shelter.

Amjad Jamal, a World Food Program (WFP) official, says that relief efforts are being hampered by a lack of a reliable count for the number of affected people. The WFP, he says, has only managed to reach four out of the six million that required immediate food assistance.

Shabnum Sarfaraz, a coordinator at Fatima Memorial System, a healthcare NGO, also points out the need for a database to which all stakeholders could refer to coordinate their efforts.

She says that most NGOs are located in areas that can easily be reached from major towns and cities. This, she adds, has disadvantaged far-off districts like Rajanpur and Dera Ghazi Khan.

Fatima Memorial System has yet been able to extend its work to Dera Ghazi Khan only. The NGO is working there in collaboration with six micro-level organisations.

At the moment the government and the UN agencies are relying on WFP’s latest Vulnerability Assessment and Mapping survey for data.

The IOM and the WFP draw up their lists of beneficiaries themselves, Rehman and Jamal say.

With the rehabilitation stage setting off, another issue the aid workers point out is the sustainability of resettlements at old locations.

“How do we know for sure that their homes will not be flooded next year?” asks Shahima Rehman, the FMS chairperson.

An official in RY Khan district administration suggests that the government should legislate to ban people from settling close to riverbanks. He says that these people could be provided with land at alternate places.