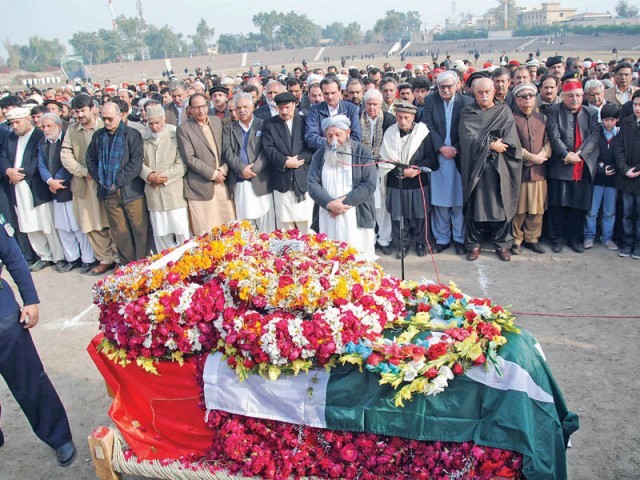 Senior politicians joined on Sunday thousands of mourners at the funeral of Bashir Ahmed Bilour, senior minister in the Khyer-Pakhtunkhwa government and the most outspoken critic of the Taliban who was killed in a suicide attack a day earlier.

Bilour’s 40-year-long political career ended abruptly on Saturday evening when a teenage suicide bomber struck at a public rally, killing him, his top aide and seven others in the Dhaki Nalbandi neighbourhood of Peshawar.

Draped in the flags of Pakistan and ruling Awami National Party (ANP), Bilour’s coffin was brought to the Colonel Sher Khan Sport Stadium on Khyber Road in an ambulance from the residence of the slain leader’s elder brother Ghulam Ahmed Bilour for funeral.

Defying Taliban threats, a sea of mourners had turned up to attend the last rites of the 69-year-old assassinated politician. Apart from ANP workers, prominent politicians and leaders of mainstream political parties were also in attendance.

Extraordinary security measures were put in place in and around the stadium. Helicopters flew overhead, while mourners were  subjected to body searches at the security gates set up at the entrance of the stadium. Authorities had installed jamming equipment to block mobile phone signals, which can be used to trigger bombs.

After the funeral prayers, the coffin was driven to the Bilour family’s ancestral Syed Hasan Pirbiri graveyard where he was laid to rest beside his mother and nephew. A smartly turned-out contingent of police presented him a guard of honour.

“Bilour was a sober, seasoned and brave politician. His death has created a vacuum in provincial politics,” PPP’s Anwar Saifullah told AFP after attending the funeral. The ANP is a coalition partner of the PPP at the centre – the two parties are also partners in the provincial government.

PML-N’s provincial president Amir Muqam said: “Bilour was a courageous politician – the ANP has suffered a big loss in Peshawar.”

Sherpao said the country could not afford to lose more politicians to militancy. “If such brutal killing of political leaders continues, our country would become leaderless,” he added.

MQM politician Ghufran Khan said his party would stand by the ANP in the war against militancy – which has become a battle for the country’s survival.

Haroon Bilour, son of the late Bashir Bilour, said their “war against evil” would not end with the assassination of his father.

Describing his death as a national loss, the president said Bashir Bilour will always be remembered as a martyr who never flinched in the fight against militancy, according to the presidential spokesperson.

PPP Chairperson Bilawal Bhutto Zardari denounced the Peshawar blast as another coward attempt by the terrorists hiding in holes to frighten our brave nation. We would fight against these terrorist elements and purge society of this cancer of violent extremism, he said in a statement. (With additional reporting by our correspondent in Karachi)