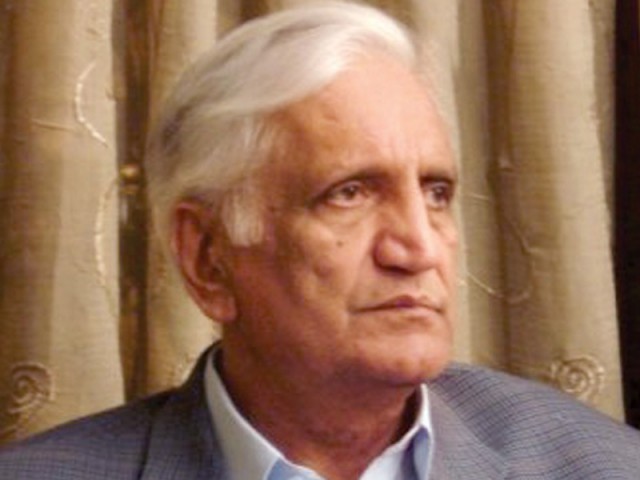 PESHAWAR: A suicide blast in the Qissa Khawani Bazaar area of Peshawar killed KP Senior Minister Bashir Ahmed Bilour along with eight others and injured at least 17 people on Saturday, reported Express News.

Taliban have claimed responsibility for the attack.

The country will observe a day of mourning on Sunday, December 23. The national flag will fly at half mast.

Bilour’s funeral will be held on Sunday afternoon at Sher Khan Stadium.

PM Raja Pervez Ashraf has announced one-day mourning on Sunday across the country over the death Bilour, reported Radio Pakistan.

KP government has announced three days of mourning with the flag standing on half mast in remembrance of Bashir Bilour.

Funeral prayers for Bilour will be offered at 2:00 pm, December 23 at Sher Khan Stadium.

Bomb squad experts said the suicide bomber detonated his explosives when the ANP meeting was at its peak.

“The suicide bomber walked into the house where the meeting was taking place and detonated his vest,” Shafqat Malik, chief of the Bomb Disposal Squad, told AFP.

Four policemen were among the wounded.

The Pakistani Taliban have claimed responsibility for the suicide attack, according to a spokesperson.

ANP Chief Asfandyar Wali Khan mourned Bilour’s death and said it was a great loss for the country.

Information Minister Qamar Zaman Kaira spoke of Bilour’s bravery and commended his efforts in the war against terrorism, as reported by Radio Pakistan.

Doctors said Bashir Bilour had severe injuries on his chest and stomach and was on the ventilator as doctors tried their best to save him.

Bilour was brought in to Lady Reading Hospital in serious condition as he did not have a pulse and was not even breathing, a hospital official told Express News.

The official added that when he was brought in he was in a state of shock and doctors and specialists tried for 1.5 hours to resuscitate him, but he succumbed to his injuries.

Haji Noor, his personal secretary, also died in the blast.

Federal Railways Minister Ghulam Ahmed Bilour, Bashir Bilour’s elder brother, spoke to Express News and said, “We live in a Pakistan where Maulana Maududi, Maulana Abdul Haq Haqqani had signed on the constitution. We don’t know who is a sinner and who is on the right. Were those who signed on the constitution were they Muslims or are these [terrorists] muslims? We just don’t know!”

He added that Bashir never fussed much about security, but he was always accompanied by one or two guards. Ghulam commended Bashir for his bravery.

Bashir Bilour’s funeral arrangements will be finalised after his sons return, according to Ghulam.

KP Information Minister Mian Iftikhar Hussain, while talking to Express News, said that he salutes Bashir Bilour. “He sacrificed himself for the country and he fought against militants,” Hussain added.

Hussain reports that he and Bilour used to get 3-4 threats every day.

The KP minister demands a tripartite commission between the US, Afghanistan and Pakistan to solve this crisis.

Bashir Bilour died from his injuries while being treated at Lady Reading Hospital.

Two motorcycles and a car were also destroyed in the attack.

This was the third time Bilour had been targeted by terrorists and was on their hit list.

Provinicial MPA Bashir Bilour is in critical condition after being injured. Doctors are currently operating on him at Lady Reading Hospital.

Three of the injured are in critical condition and are in the ICU.

Bomb Disposal Squad has determined that this was a suicide blast.

Kabli police station SHO Sattar Khan was killed in the blast, along with four others.

Police officials reported that the blast went off during an Awami National Party (ANP) rally.

Bomb Disposal Squad and more police officials are en route to the scene of the blast.

The injured have been moved to Lady Reading Hospital.

Correction: An earlier version of the story listed an incorrect date for the funeral. The error is regretted.

Did you know?: One Pound Fish is the Gangnam Style of 2013