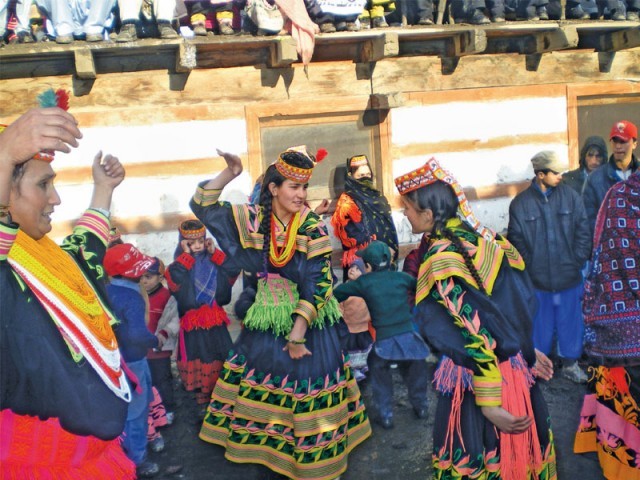 Kalash girls of all ages dress in traditional attire over the three most important days in the festival, December 20 to 22. PHOTO: MUHKAMAEON/EXPRESS

The three most important days of the religious festival, Chitramas, held in Kalash Valley every winter began on Thursday as locals shut themselves in their houses to prepare for the year ahead.

The festival began on December 7; its most important dates are December 20 for Rumbur Valley, December 21 for Bumburet Valley and December 22 for Birir valley. During the festival, Kalash men and women perform folk dances in honour of their god Balimain, who is believed to visit Kalash during the time of the festival.

Animals are also sacrificed at the altar of the god known as Malosh and people mark the beginning of the new year for harvesting.

A participant, Abdul Khaliq Kalash said religious leaders have decided to sacrifice 40 goats this year. After the sacrifice, people go back to their guesthouses to drink locally brewed liquor. The animals’ meat is also distributed among community members over the three days from December 20 to 22.

Abdul Khaliq said no one from outside the community is allowed to talk to the Kalash people during the said days. “Those who violate the rule will be punished by being forced to take a bath in frozen water.”

Other rituals and festivities are held indoors and not performed openly, he added. At the end of the three days, Kalash men beat drums followed by women and children and religious leaders, all singing religious songs, said a Kalash woman named Said Gul.

She added that they then walk towards a field called ‘Charsue’, which is where the traditional dances take place. People join their hands to form a chain and snake their way through the village dancing, she added.

After the dances, the men divide themselves in two groups and sing more songs, some reminding them of the bravery of their ancestors. Other songs are about natural resources they grew up with in the valley, while some are love songs.

On the evening of December 22, religious leader Baitan visits the altar of Malosh and predicts what will happen in the coming year. He tries to spot a fox as it is considered a good omen.

Every year, many local and foreign tourists visit the valley to witness the rare cultural performances and rituals.

Another Kalash man said the past year has not been a good one for their community. He said Kalash people received threats from militants and were victims of multiple cross-border attacks. Sometimes their sheep and goats were stolen and one of their men was also killed, he added. “All Kalash people are praying that they spend this year in peace.”