A ziarat to Ziarat

A ziarat to Ziarat

The author and his family decide to get out of smoggy Karach­i to breath­e the fresh air of a Baloch­istan hill statio­n.
By Hafiz Muzzammil
Published: December 23, 2012
Tweet Email 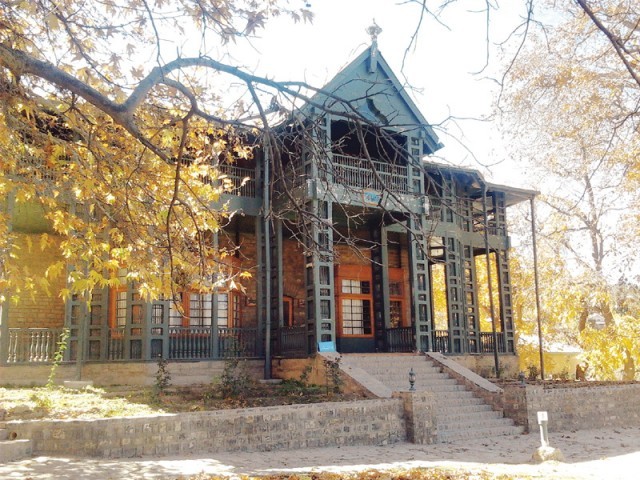 Despite warnings and misgivings, the author and his family decide to get out of smoggy Karachi to breathe the fresh air of a Balochistan hill station.

The idea was just too risky. In fact, I was crazy to even think about going ahead with it.

This is what I was told by just about each and every one of my friends when I discussed with them my plans to take a family trip, with my wife and two kids in tow, to Ziarat. This is that hill station in Balochistan famous for being the Quaid-i-Azam’s health retreat in his last days of battling with tuberculosis. History aside, it’s also famous for its omnipresent junipers.

Ten years back, when I visited Quetta and Ziarat with a bunch of college friends, I was given the same travel advisory. As a result of not paying heed to this advice, we survived just a few hours in the mountains and had to come down to Quetta — but only because of the killer December cold!

This time, however, I was going to be more careful about the timing of the trip. Choosing November for the outing also meant that our winter wear inventory, lying idle in the attic for years, could now be utilised. We weren’t particularly interested in the main attractions of Ziarat — Jinnah’s Residency and the junipers — but we really wanted to see the fabled autumn colours of the region — a sight rarely witnessed in Karachi, which seems to have no seasons at all. My cousin from New York had shared pictures of colourful cherry blossoms blooming in his city during this season, which made me realise with a shock that fall colors do not appear only on seasonal lawn prints!

But my drive to make the trip was just too strong to be put down by any apprehensions. And I figured that if I take necessary precautions, it won’t be all that risky. And so convinced in this belief, I went ahead with the trip.

Plan ‘A’ was to do the 1,700 km roundtrip by car, which was then switched to Plan ‘B’ of using public transport instead. This was because we didn’t want to drive through the volatile Khuzdar city, located halfway between Karachi and Ziarat on the RCD highway. Priced above average, the overnight Al-Aziz coach to Quetta was more comfortable than what we had expected and was comparable to the ones we rode around peninsular Malaysia. But it was the lack of en route facilities, especially toilets, which made the long journey a bit inconvenient. We reached Quetta around sunrise, transferred to the Ziarat-bound wagon, and finally made it to the hill station before midday — safe and sound.

As we disembarked from the wagon, it felt like we had walked into a cold storage, even though the sun shone on our heads unabatedly. What we found even more amusing was that everyone we met was so worried about the law and order situation in Karachi and inquired rather innocently how we came out of the bleeding metropolis alive! Funny that Karachiites think that Quetta is unsafe while locals in Quetta think that Karachi is way more dangerous.

From a tourist’s point of view, there is not much to do in Ziarat. But this was exactly what we wanted to do: relax. There are a few exceptions though, and the Residency, where Jinnah spent his last days, is the most noteworthy. Gardens around the Residency are the best maintained in the whole of Ziarat. We enjoyed our little picnic there the next day as we watched the golden leaves falling off trees and dancing in the air, making their way down to the ground. The rustling of the leaves produced a synchronised whistling sound that broke the silence around us and announced the coming of autumn. The sunshine was just perfect to replenish our Vitamin D levels; the air was as fresh as it could be, presenting us with the opportunity to purify our polluted urbanite lungs; the skies were so clear and blue that we could see even the moon in the brightest of afternoons!

The aesthetically designed wooden building in the background was not just a testament to the architectural marvel of its creators, but it was also reminiscent of the colonial era. In its good old days, I thought to myself, this serene resort must have looked over the East India Company’s rebellious northwestern frontiers towards Afghanistan and beyond.

Back in our cozy hotel room, our little angel found the gas heater an object of interest while her younger accomplice struggled to deal with the many warm layers he wasn’t used to wearing. At night, the barking sounds from the wild suggested that the jungle was not far away. In the bazaar the next day, we found people to be friendly and courteous — except for one pushy tout trying to sell rooms in his guesthouse to the only tourists in town. Overall, the ambiance was laidback, peaceful, yet still commercial and comparable to other mountain stations like Gilgit and Chitral. Most of the people appeared to be religious and the active presence of religio-political parties was very visible on the streets. Surprisingly though, in this apparently conservative society, we saw many girls in uniforms coming out of schools, indicating that women literacy in this area may be on the rise.

I brought this up with my host, Abdus Samad Dotani, a local of Ziarat who had invited us for a sumptuous luncheon and a trip to his family farms in Kewas the next day. He replied that women from the previous generation, for instance his wife, were not literate at all, but he had made sure all his daughters received an education. He said that more and more people were sending their daughters to school now, and believed that well over 50 per cent girls of his valley were receiving an education.  The number of female students is even higher in places where there are schools nearby, he claimed.

A trip to Ziarat is incomplete without visiting one of its fruit valleys, and we were lucky that Dotani had arranged for us an outing at his family farm.

The view from the village was one that we had longed to see; it was full of colors: red, orange, yellow, and green. Fat woolly sheep in black and white added to the rusticity of the scenery. Our host had made sure that a few trees in his orchard were left laden with apples for his guests to pick (it was the perfect opportunity for me to click away with my camera and capture the rustic village beauty that I could show off to my cousin in New York!), while he also packed us a couple of cartons to take home. Chances are you won’t die from a bomb blast in Quetta but will die of overeating thanks to Pashtun hospitality!

After spending one more night in Ziarat, we began our long journey back home. All the way, I kept imagining a future when continuing the road trip all the way to Samarkand in Uzbekistan — another 1,500 km — would not be deemed too dangerous to sanely undertake. Perhaps it won’t be long before I undertake one, for I believe where there is a road there is a way. If you have the will, that is.

Bride vs. dulhan: The many sides of a desi bride