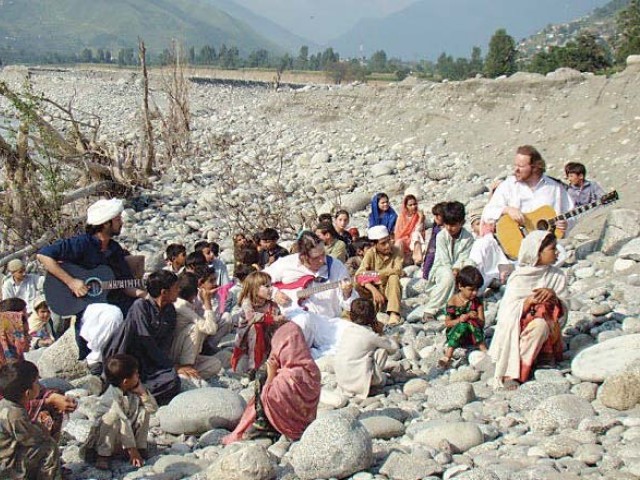 KARACHI: Inspired by reading Greg Mortenson’s Three Cups of Tea, musician Lanny Cordola is in Pakistan to spread a message of love and peace.

After being introduced by Mark LeVine (author of Heavy Metal Islam: Rock, Resistance, and the Struggle for the Soul of Islam) to Todd Shea, a social worker and musician who is currently based in Pakistan, Cordola spent time researching Pakistan  and met inspiring people that made him feel like “all the pieces had come together”. A self confessed fan of Nusrat Fateh Ali Khan and sufi music, Cordola wants to create great music by working with Pakistani musicians.

The initiative is called ‘The Pakistan America Peace through Music Project’ and will feature Pakistani and American musicians working together on songs that will be recorded in Pakistan and the US.

Cordola waxed lyrical about peace and love and harmony; a concept he says he was first influenced from by looking at musicians such as The Beatles and Bob Marley who worked on the same lines.

“A number of musicians are involved,” he says. “We’re going to be recording with Mekaal Hasan for example. The project is a grand finale … there are so many incredible Pakistanis I’ve met and we want to build incredible ties.”

Cordola has been travelling through the country. He stopped in Swat during his trip to record a song with Atif Aslam that Shea had written, and has been meeting musicians in Karachi, including the indie rock band Mole – who he says have “enormous potential”.

When asked whether musicians can do more to raise awareness about the flood relief campaign, Cordola says “There are so many people doing great things, but we can do better. It is paramount that we help those in need, to build peace, to help those who are dispossessed and sick. It is important to forge intimate relationships with people. I was in Islamabad and we met these two very religious men who didn’t think music was right and I explained to them what we’re doing. At the end of the dialogue, one of them said, ‘well feed our children first, then play music.’ So it’s important to talk to people.”

“I want this to be a long term effort,” Cordola tells The Express Tribune when talking about the initiative.

Cordola, who met Atif Aslam in Los Angeles, raves about the pop star.

“I couldn’t be more grateful to him. As a friend and as a musician… we have these long conversations about history and music and when we played together we had great chemistry.”

“All of this is for the kids,” he says, recalling his trip to Swat. “If we can open our hearts, minds and souls, music can express everything.”