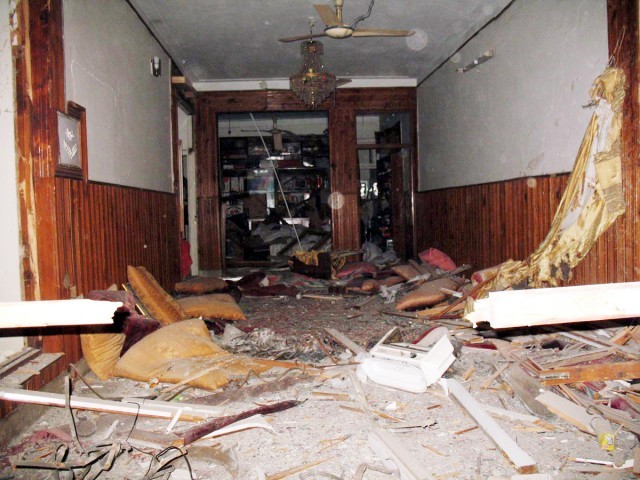 A house damaged during the car explosion and rocket attacks on Saturday evening in Pesahwar. PHOTO: IQBAL MAMOUND/EXPRESS

PESHAWAR: At least three people, including a police officer were killed and 46 others were  injured in rocket attacks on the Bacha Khan International Airport and subsequent exchange of fire between security forces and terrorists on the Old Bara Road on Saturday night.

The Taliban claimed responsibility for the attack.

Inter-services Public Relations (ISPR) statement said that a search and clear operation in and around the base was culminated in the early hours of Sunday morning. It added that as many as five terrorists were killed in an exchange of fire with army officials posted at the entrance of the base. These terrorists are believed to be wearing suicide vests and their bodies will be removed after being cleared by the bomb disposal squad.

The statement added that that militants were using two vehicles laden with explosives, grenades, rockets and automatic weapons to create a window to infiltrate the base. However, one of the cars into a wall near the airport, before exploding. This explosion caused a number of civilian injuries. The other vehicle was severely damaged in a fire fight with security officials. At least three suicide vests were also recovered from near one of the cars.

Earlier, at around 8:30 pm in the night, two rockets were fired at the Bacha Khan International Airport. They struck the outer wall around the airport and a guest house on Abdarra Road. That initial attack injured at least 15 people injured who were rushed to the nearby Khyber Teaching Hospital (KTH).

When police was moved to the area where rockets had hit the building, some people who had reportedly taken positions on a roof top in University Town fired at the police.

“We have reports that a policeman deployed at the Old Bara Road check post has been killed along with a civilian and their dead bodies are lying there. A Suzuki Carry van has also been on fire nearby probably hit by a rocket too,” an official of the Town police station told The Express Tribune on the condition of anonymity.

“We have been asked to move the Anti Terrorists Squad (ATS) commandoes to the area equipped with night vision goggles as these terrorists have taken position on a roof top and are offering heavy resistance by firing at police,” he said, adding that SSP Operation Imran Shahid himself was supervising the operation.

SSP Operation Imran told The Express Tribune that “situation was tight and they were in the middle of an operation.” Officials had cordoned off University town and were sweeping it for more terrorists.

Officials at the Khyber Teaching Hospital told The Express Tribune that at least 46 injured people have been brought there in addition to two dead bodies. Per MS Zafar Afridi, five of the injured are in critical condition.

The Pehawar airport shares its airstrip with a Pakistan Air Force base. A PAF spokesperson said that the rockets had  only damaged the outer wall of the airport and that all aircraft and on base personnel were safe and that terrorists had failed to penetrate the outer perimeter.

The Pakistani Taliban late on Saturday claimed responsibility for the suicide attack on Peshawar airport.

“We carried out this suicide attack, we will carry more such attacks on this airport,” Taliban spokesman Ehsanullah Ehsan told AFP by telephone from an undisclosed location.

According to Civil Aviation Authority (CAA) officials around 120 passengers onboard flight PK 755 had landed at Bacha Khan International Airport and are currently at the airport lounge and are safe. They added that a flight due to depart for Riyadh from Peshawar has been delayed.

CAA spokesman George Pervez told The Express Tribune that all the passengers are safe and that the Airport Security Force (ASF) accompanied by security forces have cordoned off the lounge.

“I cannot say anything regarding the situation unless we receive clearance from law enforcing agencies. We will never put precious lives of the passengers in danger. We can delay flights and an even cancel them,” he said. A Peshawar bound flight from Karachi due to land at 22:00 was diverted to Islamabad.