Nearly three-quarters of Pakistan girls not in school

Nearly three-quarters of Pakistan girls not in school 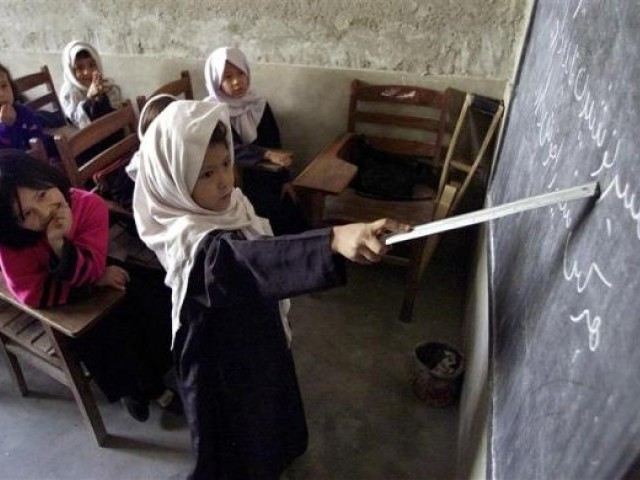 ISLAMABAD: Nearly three quarters of young Pakistani girls are not enrolled in primary school and the number finishing five years in education has declined, a new UN and government report showed Wednesday.

The findings expose the miserable state of education for millions in Pakistan, where the Taliban shot 15-year-old Malala Yousafzai in the head in October to silence her campaign for the right to an education.

“Nearly half of primary school age children are not enrolled in school and among eligible girls the out of school proportion is closer to three-quarters. In absolute numbers, out-of-school girls outnumber their male counterparts,” it said.

“Completion rates to the fifth year of schooling have actually declined in the past five years,” it said. Fifty-five percent of all Pakistani adults are illiterate and among women the rate is closer to 75 percent, it added.

The report said women are denied their basic right to education and to a decent life.

“Females in Pakistan face discrimination, exploitation and abuse at many levels, starting with girls who are prevented from exercising their basic rights to education either because of traditional family practices, economic necessity or as a consequence of the destruction of schools by militants.”

On Monday, President Asif Ali Zardari pledged $10 million to help educate all girls by 2015 as part of a global fund set up in Malala’s name.

Ziauddin Yousafzai, Malala’s father, a former teacher and headmaster, has been appointed to help meet the global target.

His daughter, who is being treated in a British hospital after the attack on her school bus on October 9, will herself join the campaign when she is better.

Saba Gul Khattak, a member of Pakistan’s planning commission, confirmed that the country was lagging behind on its Millennium Development Goals, including on education.

Dual office: ‘Courts are here to enforce judgements, not convict or disqualify’