Looking back with 20/20 vision

Looking back with 20/20 vision 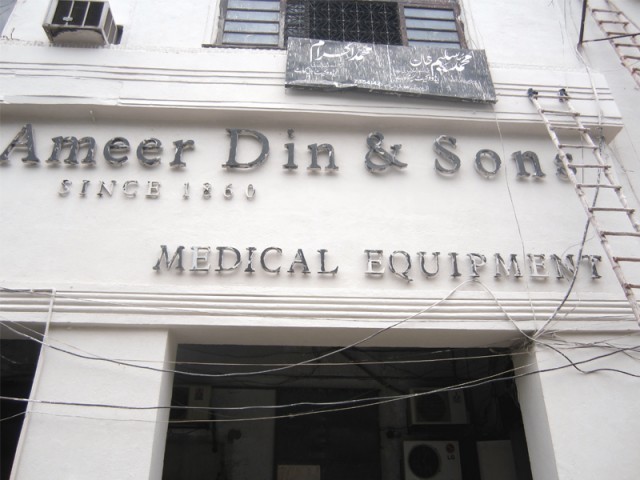 The story behind one of Lahore’s retail landmarks. PHOTO: SONIA MALIK

Sheikh Hafizuddin is 90-years-old. The wrinkles on his face are like the roadmap of a life well-lived. Endless pairs of eyes have found brighter vision through the corrective lenses and spectacles his business has provided; so many have been cured by buying medicines off his pharmacy counter. Countless fingers (and shirt pockets) have been stained by the ink of the fountain pens sold at his store. In many a profound moment, the men of Lahore have lit up cigarettes they brought at his store, and reflected on life.

Hafizuddin has seen boys grow into men and fathers grow into grandfathers, with the next generation holding onto the grandfather’s finger as they enter the shop for their first pair of glasses. For Lahoris, the stores under the family signature “Haji S Ameerdin & Sons” are a part of Lahore’s heritage. Every day, at 11 am, Hafizuddin sets out to visit his shop at no. 26, The Mall. He then goes to his frame manufacturing factory at Thokar Niaz Baig around noon. He joined the business of his father Haji Sheikh Allah Dita, Lahore’s oldest drug and optical equipment shop, in his youth. “I had just passed my FA exam from Dayal Singh College then. I was the second oldest of my seven brothers. My father, who ran a small optical shop in Lohari Gate, called me over and said, ‘the nature of business these days is changing. I want your help in improving the business.’ I said yes,” Hafizuddin recalls.

He did not pursue further studies and instead immersed himself in his father’s business. Today, he runs three Haji Ameerdin & Sons outlets in Lahore, and one each in Karachi, Multan and Rawalpindi. Expansion included the setting up of Ethical Laboratories in Thokar Niaz Baig and a frame manufacturing factory.

As Hafizuddin embarked on reflections about the 70 years of this legendary family business of Lahore, he shared bits of history. E Plomers was the first drug and optician’s shop set up by the British in Lahore in 1864, the place his family acquired in 1962.

It all started with a British man called Edward Plomer who came to India with the East India Company in the early 1860s. Since the English were still settling in and needed a variety of goods and services, Plomer decided to also sell stationary, tobacco and set up a photography studio, as is indicated in two boards erected at the shop till today. “I believe he was trying to sell products exclusively to cater to the British, ones that were not available anywhere else,” Hafizuddin said.

After Plomer passed away in the early 1900s, his wife took over the business but then sold it to John Francis Koyle, an Englishman from Goa, in 1928. Koyle had moved to Lahore and was also running a factory producing aerated soda at Queen’s Road. Koyle in turn sold the business to Bal Krishan Chopra, a native of Lahore who owned other buildings at The Mall too. Medicines sold here at the time were imported from six or seven international manufacturers and were mixed in proportions prescribed by the doctors.  Even today, some medicines are imported from some of the same manufacturers as in the 1900s.

This sign’s been outside the wall of the E Plomers building since 1864. PHOTO: SONIA MALIK

Meanwhile, even as the shop changed hands, Hafizuddin’s father was also contemplating a change of his own. “My father was very keen to move out of the inner city area of Lohari Gate, as Anarkali and The Mall were fast becoming retail hubs. We owned a shop in Anarkali which my father moved his business to in 1950. When in 1952, Koyle decided to move back to England and was looking to sell his business; my father grabbed the opportunity, but did not buy the actual building until ten years later. In 1962 the building was purchased for two million rupees in an open house auction,” says Hafizuddin.

“At that time, the English felt that Pakistan would not survive for long, and would fall apart. Most Hindus had left Lahore by then, and the English were seeking to sell what they owned,” Hafizuddin says, reminiscing about the post-partition days.

“The business was purchased, hence we kept the E Plomer name,” explains Hafizuddin. “The name Ameerdin was included because this is what my father’s shop in Lohari was called. Both are essentially the same thing. The shop was named after my brother,” Hafizuddin recalls.

As Lahore grew, so did the demand for Pharmacies. Besides E Plomers, the other drug store on the Mall was Smiths and Gambles. It was also sold prior to partition. Later two more drug stores, Jagit Singh and Sons, which later came to be known as Fazil Din & Sons, and opposite to it, Jai & Sons, opened up. So there were four shops in all when Hafizuddin’s family purchased the business.

“In 1947, my father was leaving for Hajj via Karachi and I went to see him off. An optician’s shop, Himalaya Optical Company, was for sale. It was owned by a man who wanted to move to India,” Hafizuddin says, recalling how the family business expanded into Karachi. “As my father was leaving for his Hajj, he told him that he cannot make the payment until three months later, which was the time it took back then to return from Mecca. The shop owner agreed and it was purchased later that year.”

Multan was next. “After partition, a few senior administrators of the local government in Multan visited my father requesting him to open a shop as there were no opticians there and as a consequence, Multanis had to travel to Lahore or Karachi for treatment. My father complied with their request by opening a shop there in 1949,” he said. A shop in Rawalpindi was set up in 1952.

Most shelves used in the shop are over 150 years old. PHOTO: SONIA MALIK

“We had continued the system of importing the drugs, but in 1962, we took a step forward with the setting up of Ethical laboratories, which I founded. We specialise in ophthalmic solutions,” says Hafizuddin. This sister concern of M/S Haji S Ameerdin & Sons was established in collaboration with and under the technical direction of M/S Smith Miller & Patch of USA. By this time Ameerdin & Sons has become a household name, and a lot of its less ethical competitors tried to cash in by opening shops with the same name. Until just four years ago, a Lohari gate shop selling glasses still operated under the name of Haji S Ameerdin & sons. Hafizuddin denies any connection with that shop. “My father closed down our original Lohari gate shop as soon as he relocated to Anarkali, but many have tried to profit from his name and his reputation of being the only Muslim optician in Lahore in yesteryears. It was not just this one shop outside the Lohari Gate that stole his name, but there were at least three others as well. Some closed a while ago and the others only closed after I sued them.”

The years have flown by, but even at the ripe old age of 90, the thought of visiting his beloved shops is enough to get Hafizuddin out of bed in the morning.  Such are the people who are part of our living heritage. Their stories need to be told and re-told before they become diffused memories of the past.