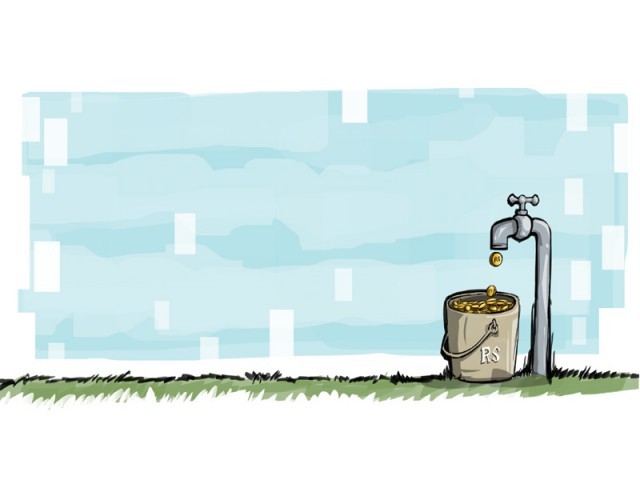 Currently, microcredit is reaching only 2.3 million borrowers, which is less than 10% of a target market that is estimated to be around 30 million. ILLUSTRATION: JAMAL KHURSHID

The Pakistan Microfinance Network (PMN) was also provided funding support under the ISF to enable it to conduct research and develop the industry’s infrastructure such as the testing of microfinance Credit Information Bureau (CIB) in Lahore and its expansion at the national level, he said.

The first round of the fund, held to promote government-to-persons (G2P) payments, has now been completed with the decision to award Rs505 million to six projects being undertaken by applicant institutions.

Muktadir said now four branchless banking service providers were operating with full range of services. The brick and mortar retail network of the entire financial industry stood at around 11,000 outlets after 65 years whereas within a short span of two and a half years the network of branchless banking retail agents had grown beyond 30,000, he said.

With almost 1.8 million mobile banking accounts, branchless banking customers conducted more than 28.4 million transactions worth Rs115.3 billion during the quarter ended June 2012, he said, adding the average size of transaction was Rs4,065, which showed that the technology was helping the ‘unbanked’ to have access to financial services.

The deputy governor pointed out that mobile phone banking had emerged as a new market niche for both banks and mobile network operators and hoped the agent network would rapidly expand to reach all rural and remote locations across the country.

He, however, was of the view that despite the early success of microfinance and branchless banking, the financial exclusion was still very high. Currently, microcredit is reaching only 2.3 million borrowers, which is less than 10% of a target market that is estimated to be around 30 million.

He noted that this high level of financial exclusion offered enormous opportunities to the microfinance providers to benefit from a favourable market environment and grow fast.

Speaking on the occasion, Mohammad Ali Jinnah University President Dr Abdul Wahab said the Japanese model of assistance in which big industries assisted new small industries in initial years had been successfully implemented in Sialkot’s sports industry, which should also be emulated in other parts of Pakistan.

However, the Japanese model, which Sialkot copied, proved very successful in which small industries received assistance from bigger industries that helped promote entrepreneurship and employment.

Orangi Pilot Project Executive Director Anwar Rashid said there were thousands of villages in rural Sindh and south Punjab where microfinance institutions had no presence at all.