In the latest case of minori­ty rights, not even a court order was enough to save the temple­s or the homes.
By Editorial
Published: December 4, 2012
Tweet Email 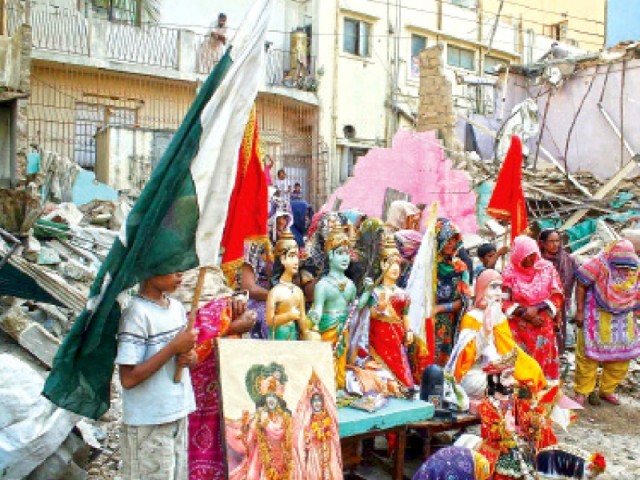 A Hindu temple in Soldier Bazaar was demolished on Saturday while the court was hearing petition seeking a stay order. PHOTO: ATHAR KHAN/EXPRESS

By demolishing over a century-old Hindu temple in Karachi’s Soldier Bazaar locality, not only have we razed the respect of the minority community but we have also failed to uphold its dignity. This action is all the more infuriating for the Hindu community since the Sindh High Court was hearing a petition to stop the demolition of the temple and had given a stay order till December 7. The police have denied that a temple even existed, despite the fact that area residents were able to retrieve a plaque naming the pre-Partition Shri Rama Pir Mandir.

It is noteworthy that the president has expressed concern over this demolition and has directed the authorities concerned to submit a report on the incident. There are claims, however, that the demolition was, in fact, not against the temple but the encroachment of houses around which some 40 people, now made homeless, had built their lives. Four houses in which Hindus lived were also knocked over by a private builder who moved into the area backed by large contingents of the police and Rangers, ordering residents out of homes. The affected Hindus say they were not encroachers at all and their ancestors had lived in the area for centuries. Claims made that the deities within the temple have been taken by the police along with the gold present, add to the vexed sentiments of the Hindus.

Such incidents mar the sense of harmony which needs to exist between communities. Special sensitivity needs to be demonstrated towards the minority communities. We should be going out of the way to ensure their rights are protected. In the latest case, not even a court order was enough to save the temples or the homes. As Hindus in Karachi continue their protest, we need to think about what should be done. Measures are needed to protect the minorities, definitive policies need to be adopted and we need to ensure they are adhered to by all departments. Profit should not make way for the destruction of places of worship as has happened in Karachi and other parts of the country on multiple occasions. Such actions tend to rip the community apart, literally and figuratively.

Keeping a check on women