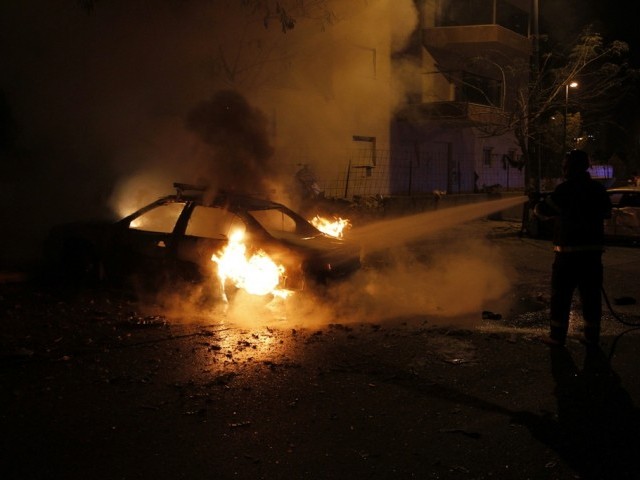 An Israeli firefighter extinguishes a burning car after a rocket fired by Palestinian militants in Gaza landed in the southern city of Beersheba November 14, 2012. PHOTO: REUTERS

The armed wing of Hamas, the Ezzedine al-Qassam Brigades, said that the three men were all members and were hit as they travelled in a motorcyle-taxi.

The Israeli military launched its operation on Wednesday with the killing of a top Hamas commander followed by what Palestinians said were at least 60 Israeli air strikes.

Ahmed Jaabari, the operational commander of Hamas’s armed wing, the Ezzedine al-Qassam Brigades, was killed along with his bodyguard, Mohammed al-Hams, in an initial Israeli strike on a car in Gaza City, the movement said.

Late Wednesday medics reported another fatality in the wave of strikes on targets across the territory.

Hospitals and medical centres across Gaza were put on high alert after the initial strikes as Israel warned the hit on Jaabari was only “the beginning” and said “a significant number” of arms dumps were within civilian and residential areas.

Hamas’s Al-Aqsa television showed ambulances racing through the streets on Wednesday, transporting casualties to crowded emergency rooms, including at the Shifa hospital.

A man wearing blue pyjamas was seen carrying his son and two men supported an elderly man as he struggled to move away from the site of one explosion.

The attacks came after a flare-up in violence between Israel and Gaza-based groups, which saw more than 120 rockets fired from the Palestinian territory into the Jewish state, and Israeli air strikes and shelling that killed seven people.