The regula­tory body will ensure the availa­bility of safe and qualit­y medica­l servic­es at afford­able prices.
By Sumera Khan
Published: November 13, 2012
Tweet Email 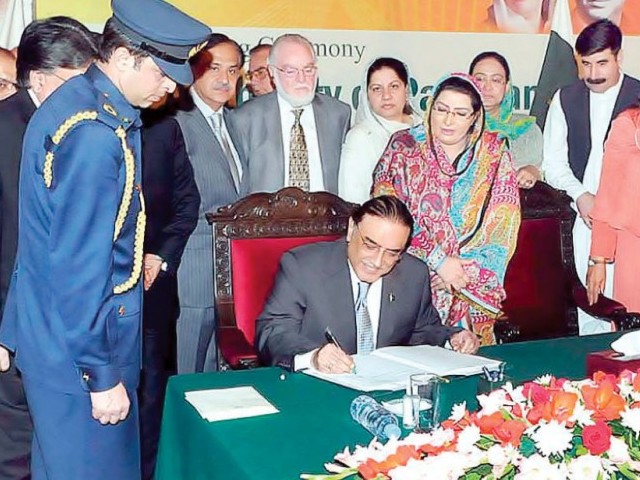 President Asif Ali Zardari on Monday signed into law the much-anticipated Drug Regulatory Authority Bill 2012 (DRAP) that sanctions the creation of an autonomous drug regulatory authority and restricts the sale of counterfeit and substandard medicines in the country.

The regulatory body will ensure the availability of safe and quality medical services at affordable prices.

Addressing the signing ceremony, President Zardari congratulated parliament over the passage of the bill. The bill, according to the president, will ensure that the interests of both patients and pharmaceutical companies are protected.

The president expressed satisfaction over the pharmaceutical industry’s growth trajectory since 1947, swelling from just a few manufacturing units at the time to more than 600 well-developed units today.

Underscoring the need to broaden base for research and development, he said that biotechnology was the engine of growth of the present century.

“Our academia needs to work closely with the industry to ensure timely infusion of related knowledge,” the president said.

He urged the pharmaceutical industry to focus on acquiring international standards of quality control and called for adopting corporate culture within the regulatory system.

The president also called for expanding the scope of pharmaceutical exports and making new advancements in the area.

Such bodies have been established in advanced countries with the aim of protecting the interests of patients, the pharmaceutical industry and officials working in the industry, he added.

The bill was moved by Minister for National Regulation and Services Dr Firdous Ashiq Awan, and was approved after much wrangling by both houses.

The establishment of Pakistan’s Drug Regulatory Authority would bring revolutionary changes in Pharmaceutical industry by regulating the manufacturing, distribution and sale of medicines in the country, Awan told The Express Tribune.

According to the new law, stern action would be taken against companies involved in manufacturing of counterfeit medicines, ensuring that the rights of patients are protected.

Furthermore, a Drug Policy Board will also be formed, and will be headed by the national regulations and services secretary.

The DRA will be headed by a chief executive officer (CEO), who will be appointed on merit by the prime minister on recommendation of members of the Drug Policy Board.

The board will consist of 16 members, out of which six will be nominated by the provincial governments, while two will be picked from pharmaceutical industry.

It further states that the board will operate with autonomy and will not be interfered by political or bureaucratic influences.