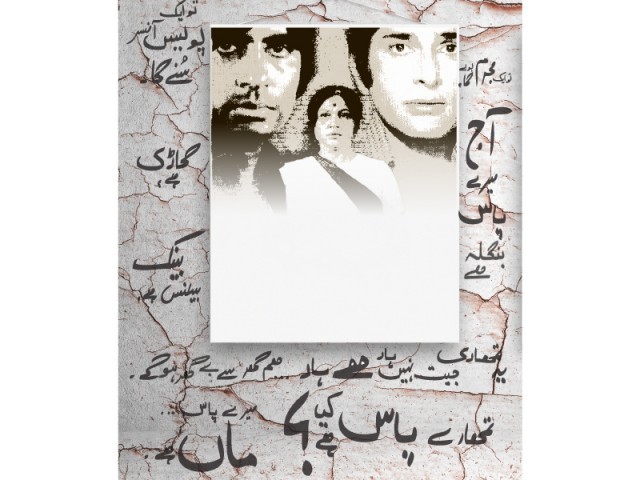 If Ravi is India, then who is Vijay? Khurram Shafique revisits the 70s’ Bollywood blockbuster Deewar, a film which has constantly been the subject of analysis, and juxtaposes it with the current state of the subcontinent.

On December 16, 1971, the Pakistani army stationed in the eastern wing of its country laid down arms before its Indian counterpart. The apparent regional supremacy of India was further enhanced by a nuclear test on May 18, 1974, when the Buddha smiled amid a radioactive haze. Behind this glitter and glory, the everyday life of a common Indian was plagued by phenomenal food shortages, an excruciating oil crisis and horrendous poverty. Was India on its way to becoming the most powerful nation in the East, or the most starved nation? This may have been the dilemma explored, consciously or unconsciously, in the movie Deewar.

Released on January 1, 1975, the film was directed by Yash Chopra and written by Salim-Javed. It presented the story of a young policeman who chooses to live in poverty, paying the price for being honest, and kills his delinquent elder brother in the line of duty.

The film was an instant success. Since then, it has been counted among the most important Indian films ever made. It has also been a subject of several analytical studies, in which it has been variously treated as a family melodrama, an action-thriller, a religious-mythical narrative and a radical-subversive text. The hero of the story — the honest policeman Ravi Verma (Shashi Kapoor) — is usually seen in these studies as the self-image of India. The question that is never asked is: if Ravi was modern India, who was his brother?

It’s just the question that needs to be asked, as the answer is too obvious to be stated. In the film, this delinquent brother refuses to worship idols, places his faith in the sacred numbers “786” and disowns his family. Thus he metaphorically creates the “wall” from which the film takes its title. Even the official page about the film on the website of its producers, Yash Raj Films, tells us: “This was the Wall, a Wall of dogmas, separating the brothers, each one opposed to the other.”

Historically, the Indian nationalists of that time may have been thinking that they had actually “killed” a delinquent brother by dismembering Pakistan (Indira Gandhi was famously reported to have said, “With this breaking away of East Pakistan, the two nation theory has now been buried, in the Bay of Bengal, forever.”).

Even as a child, Ravi is shown absorbed in listening to the song “Saray jahan say achha Hindustan hamara,” while Vijay (who grows up to be played by Amitabh Bacchan in the movie) just watches him from afar. In his grown up years, the lyrics of this song haunt Vijay as a symbol of the road not taken. They represent the ideal he forsook in order to grow rich. Tortured by guilt, he taunts Ravi and asks him if he has got anything that can compare with the wealth Vijay has amassed. Ravi’s answer has become one of the most famous lines in Indian cinema: “Mere paas ma hai” (“I have [my] mother”). It needs very little imagination to identify this “mother” with the homeland India, especially with “Saray jahan say achha” being played at the beginning of that very scene.

Ironically, film is one of the most mysterious of all art forms. It can change its meanings with time, and it can bring out deeper truths unknown even to its creators. It would be very interesting and perhaps even rewarding to revisit Deewar in the light of how perceptions of truth about the region have changed since the film was first released.

Since 1975, the prevalent academic discourse has taken an about turn on the issue of partition. Some academics have boldly suggested that the Nehru dynasty, rather than the All-India Muslim League, was in fact responsible for “partition”. Others have offered more complex explanations. In India, it is now more advantageous to say that the “wall” was created by the Indian nationalists rather than the founders of Pakistan. The much talked about biography of Jinnah written by Jaswant Singh is a case in point. If the film is interpreted in the light of this recent shift, India itself would turn out to be the big brother who walked out in anger and created “the Wall”. Pakistan would then have to be identified as Ravi.

Also, if “Saray jahan say achha” represents a common “mother”, it’s interesting to note that the writer of the song, Allama Iqbal, remains the national poet of Pakistan, just as Ravi remains with his mother rather than resorting to worldly riches. The founder of Pakistan, the Quaid-i-Azam, is also on record as saying, “If I live to see the ideal of a Muslim state being achieved in India and I were then offered to make a choice between the works of Iqbal and the rulership of the Muslim state, I would prefer the former.”

The only Iqbal left in the general consciousness of modern India is in this one song. The song coming back to haunt the memory of Vijay can therefore be seen as a depiction of a modern India being haunted by its roots.

Even more ironically, perceptions about the economic conditions of the two countries have also changed to support this alternative interpretation of the film. In 1975, a common Indian could have seen Pakistan as a nation besotted with imported luxuries (just like Vijay), while India carried the image of an austerity-driven country roughing it out with its own resources (like Ravi). Today, it has become more common to speak about the glitter and affluence of present-day India and compare it with the moribund and debt-ridden economy of Pakistan.

In fact, it is not uncommon for Pakistanis to be taunted by their Indian critics on international forums, especially in cyberspace, in a tone that is very reminiscent of Vijay in the film: “The ideals for the sake of which you are willing to put your life at stake, what have they given you? Look here! We both started together from this pavement, but today how far behind are you and how far ahead have I come! Today I have buildings, property, bank balance, bungalow, car … What have you got?”

Pakistan will argue along similar lines as Ravi did.

*The writer is the author of Iqbal: an Illustrated Biography and other works on the history and culture of Pakistan.

Sadequain of the sand