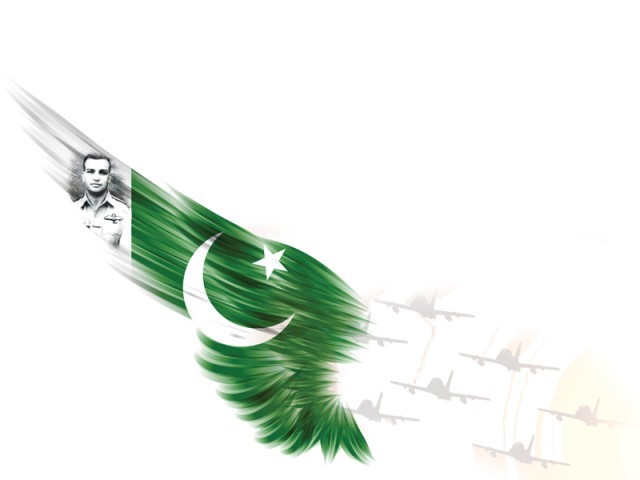 Soldiers of Pakistan. Men of honour. Defenders of the motherland. They are aplenty, as are their stories. Each story unique, each man precious, each one a hero. But some of them stand out even among the multitude of heroes. Mervyn Lesley Middlecoat was one such hero — a martyr. a patriot, a non-Muslim defender of the land of the pure.

It is almost symbolic how this story begins. The war hero Mervyn Lesley Middlecoat was born aboard a train as it stopped in Ludhiyana while travelling to Lahore from Delhi on a warm July morning in 1940. This was to be his destiny: to move from one point in time to another; to shuttle between one expedition and another.

The fourth child of Percy and Daisy Middlecoat, he never had the chance to know his father, an Anglo-Indian railway officer, who passed away when little Mervyn was only two years old.

Lahore was Mervyn’s home now, and he received his early education at Saint Anthony School and joined the Pakistan Air Force (PAF) after graduation. Very early on, he started to shine bright among his contemporaries. As he passed out of his 16th General Duty Pilot (GDP) Course in 1954, he won the Best Performance Trophy in ground subjects — an honour for any cadet.

An officer and a gentleman, Mervyn also set the bar high when it came to moral standards. He was a fearless warrior but was soft spoken when it came to personal interactions, and had good conversational abilities. Milestones were to follow. On September 27, 1957, young Mervyn married Jane, the daughter of a Christian Anglo-Indian family from Karachi. The couple was popular and happening, known for being attractive, cultured and well-liked throughout the PAF. They were often chosen as hosts, alongside the Air Chief, for the official guests of the Air Force. An addition to this storybook family came when, on October 21, 1959, a daughter named Leslie Ann Middlecoat was born to the couple. Six short years later, war broke out.

The 1965 war was a difficult time for the young nation. It not only brought us face to face with our greatest fears, but it also brought to the surface the palpable presence of heroes whom Madam Noor Jehan dubbed “humaray watan ke sajeelay jawano” in her morale-boosting songs. Mervyn, then Flight Lieutenant (better known as Commander Lesley), was deployed at Masroor Base, Karachi at the onset of the hostilities.

It didn’t take long for the war to come home. When the Indian Air Force attacked Karachi, the PAF sent F-86 Sabre aircrafts to defend the skies. True to form, Mervyn was flying one of those aircrafts.

In the dogfight that followed, Mervyn shot down two enemy aircrafts, a feat for which he came to be known as the ‘Defender of Karachi’. He was then deployed at Mushaf Air Base, Lahore, where he was given the command of Squadron 9. During the three-week war, he kept his squadron’s spirits high with the firm conviction of a commander who leads from the front. He performed an impressive series of seventeen ‘Air Sorties’ and three ‘Photo Reconnaissance’ missions. At the end of the war, he was awarded the richly deserved “Sitara-e-Jurat” for his bravery and professional leadership.

But bias and bigotry does not spare even heroes and patriots. In 1967, while Mervyn was deployed at Sargodha Air Base, his 8-year-old daughter Leslie was rehearsing for a debate competition in her school about ‘Love for the Country’. As she spoke, another child stood up and said: “This country is ours, not yours!” These six words struck little Leslie like a bombshell. Ours? Yours? Didn’t Pakistan belong to all those who loved her?

She slapped the child hard. “How dare you say this is not my country?” she shouted at the boy who had interrupted her so rudely. As a child born to fierce patriots, she had always heard her parents expressing their love for the country. Once, Jane had suggested to Mervyn that they move abroad, saying: “All your siblings and my family have emigrated, and we are alone in this country. Maybe we should also think about this.” To this, Mervyn had replied firmly: “Listen, this is my country; I was born here; my ancestors are buried here. I have spent my life defending my country; perhaps I will sacrifice my life for this country one day as well. I am not going anywhere.” No wonder then that when Leslie heard that child, it shocked her into tears of rage that continued to fall even as she returned home. “This is my country,” were the words she kept repeating like a mantra.

In the afternoon when Mervyn got back home from work, his wife told him about Leslie’s traumatic day. He tried consoling his 8-year-old daughter as best as he could: “Listen my child, don’t quarrel with such people; rather forgive them and make your own morals and character so high that their voice does not disturb you, and that your energy does not get consumed in these petty matters. Secondly, this is our country. Look at the flag of Pakistan — this green part belongs to your friend, who was beaten by you, and that white part is yours, which is connected with the pole through which this flag is hoisted. Therefore, we should continue to hold on to this white part firmly, so that the green part would continue to remain hoisted in free air.”

There was never a dull moment in the life of this war hero. Prior to the 1971 war, Mervyn was the Commanding Officer of the 26 Squadron, deployed at Peshawar Base before going on a deputation to Jordan. When war broke out once again, he left this attractive post and returned to Pakistan to fight alongside his comrades.

Early in the war, the PAF high command devised a plan to take out the Indian Air Force’s radar capability by attacking the heavily defended Jamnagar airbase. Of the six pilots selected for this near-impossible mission, one was Mervyn, who now held the rank of Wing Commander. On 12 December 1971, a day after he returned to Pakistan, Operation: Amritsar Radar was launched.

When Mervyn, together with his colleagues, was busy strafing aircrafts of the Indian Air Force at the base, they were set upon by IAF MiGs. Forced to abort the mission, Mervyn narrowly avoided two incoming missiles by lowering his altitude and increasing his speed. But when his aircraft was near the Gulf of Kutch, a third missile hit him. According to Flight Lieutenant Bharat Bhoshan Soni, the pilot who shot him down, Mervyn managed to eject from the aircraft and fell into the sea below. Soni radioed for a rescue team, but by the time they got there, Commander Lesley was nowhere to be found and was declared ‘Missing in Action’.

Upon his martyrdom, he was awarded the Sitara-e-Jurat for the second time. His widow also received a personal letter from King Hussain of Jordan, praising Mervyn for his heroic services. He wrote, “Sister, the passing away of the Shaheed is not only the loss of you and Pakistan, but also mine. It is my wish that when he is buried, his body will be wrapped up in Pakistan’s flag, but the flag of my country Jordan must be placed below his head.” His daughter, the indomitable Leslie, still has this letter in her possession, guarding it like a precious treasure.

For five long years, this martyr’s wife and daughter waited for him at 57/II, Khyber Road, the home they shared with Mervyn at the Peshawar base, in hope and anticipation of his miraculous return. They would make sure that his clothes were ironed and his slipper was placed in front of the bathroom — as if he would walk through the door any minute.

But he did not return, and after years of fruitless waiting, his loyal wife passed away on June 27, 2011. Their daughter Leslie recalls that whenever her relatives would call and insist that she move abroad with her daughter, her reply would always be the same: “This is my country.”

As for Leslie, she has never forgotten the words her father spoke to her when she was eight. “I cannot leave my country,” she says to this day.

“I must uphold the pole which hoists the white part of Pakistan’s flag, so that the green part can continue to remain high in free air till the end of time.”