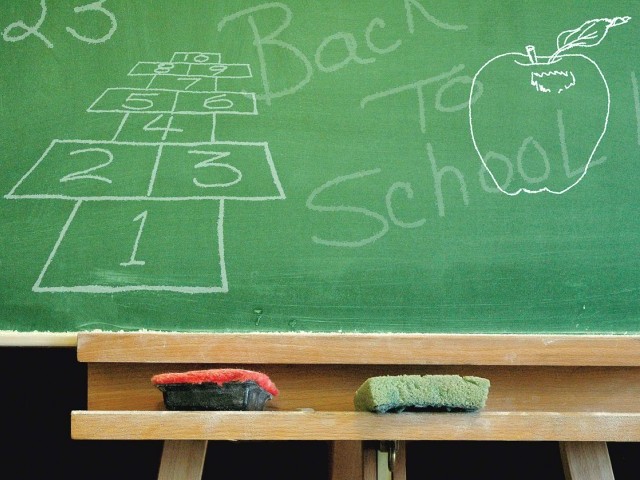 While around 100 stopped attending classes or switched to other schools, others continued education in a narrow street near the railway station.

Students of Pak Islamia Girls’ Primary School held a protest once again on Monday to raise their voice against the Punjab education department’s school-merger policy.

Nearly 50 girls gathered outside the Cantonment Police Station and demanded an independent school building in the Saddar area.

Carrying banners and placards, the girls, who have been studying under the open sky for the past two months, refused to attend classes at a nearby boys’ school in the evening.

“The Punjab government has not built any school in Saddar in 65 years. Instead, they are vacating the schools already present,” said Malik Naeem Ahmed, who has four daughters studying in Pak Islamia School.

The Punjab Education Department had earlier decided to merge Pak Islamia School with another high school in Ratta Amral, some five kilometres away.

The decision was taken under the department’s policy to merge schools with shortage of students or staff, and those set up in rented buildings.

The move, however, was not acceptable for many parents, who said the girls could not go to a school that far away.

Nearly 400 girls and 12 staff members were displaced as a result. While around 100 stopped attending classes or switched to other schools, others continued education in a narrow street near the railway station.

Due to shortage of space, they attended classes on alternate days, with half on one day and the other half on the next.

However, last week, MNA Malik Shakeel Awan made an arrangement to move the girls to Government Model High School for boys in Saddar.

It was decided that the girls would attend classes in the evening and share the building with students of Government Shaukat Girls’ Primary School. The boys, on the other hand, were to be shifted to Danies Higher Secondary School.

However, the boys too refused to accept the education department’s decision, saying that it would be difficult to travel a long distance everyday.

The EDO, Qazi Zahoorul Haq, was not available for a comment despite repeated efforts.