We need more regula­tion of the buses, coache­s, vans and other vehicl­es which carry commut­ers.
By Editorial
Published: October 31, 2012
Tweet Email 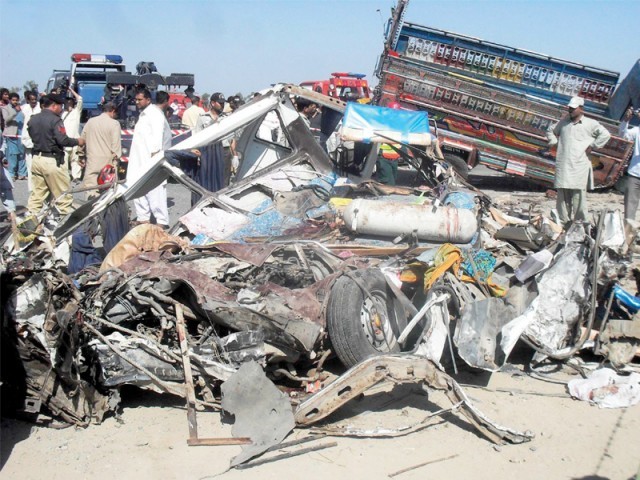 A view of wreckage at the site of the accident in Bahalwalpur. PHOTO: INP

For ordinary people who do not possess their own vehicles, travelling in our country has become like a game of Russian roulette. It has become impossible to say if the journey will end safely or whether the traveller will reach his or her final destination or not. More and more often, the latter is the case.

In the latest major crash to be reported from our roads, 24 persons were killed and several others injured when a passenger van collided with a truck at a bypass near Bahawalpur. Reports say the van carrying passengers to a location outside the city was overcrowded and that the drivers of both vehicles were driving well above the speed limit when the van made a blind turn into the bypass lane. There was obviously too little time for brakes to be slammed and the result was mass death, including that of women and children. For them, there will be no other journeys.

But others, of course, will be forced to make them and the question we need to ask ourselves is how to make our roads and highways safer. Information is rarely made public regarding the number of road accidents that occur each year but existing data suggest they run into tens of thousands of fatalities. It is hard to calculate what percentage of these accidents involve public transport vehicles but the number is certainly sizeable. We need more regulation of the buses, coaches, vans and other vehicles which carry commuters. In the first place, as is the case in many other countries, the system of licensing drivers must be improved. At present, it is possible to hire just about anyone to drive a public transport vehicle. Many do not possess any training at all. Others are paid ‘per trip’, making it tempting for them to keep the accelerator pressed firmly down. Traffic authorities, backed by federal and provincial governments, need to direct greater attention to the problem so that deaths can be averted and unnecessary hazards removed from road travel. This is something authorities owe people everywhere.