What’s with all the record setting?

What’s with all the record setting?

One must ask where funds for these activi­ties came from and why did settin­g world record­s sudden­ly become a priori­ty.
By Editorial
Published: October 24, 2012
Tweet Email 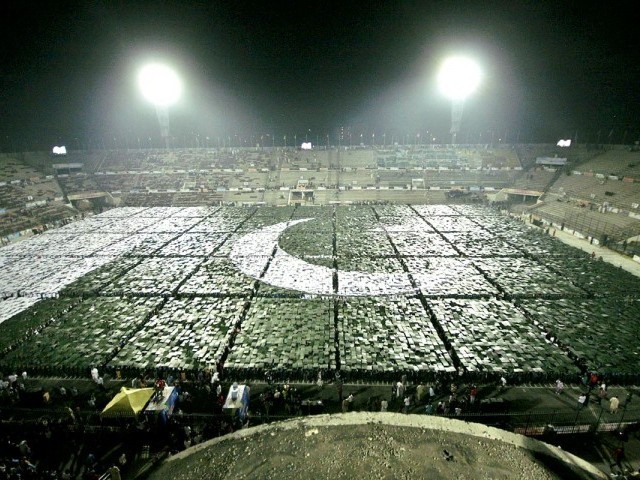 People in Lahore gather to create a new world record for the most people making a national flag. PHOTO: SHAFIQ MALIK

The past few days have seen several world records either being set or broken by Pakistanis, including the record for the most number of records broken in one day. While the sudden fervour in wanting to become world leaders in these records is intriguing, it has left many Pakistanis confused. Of course, from a patriotic standpoint, one must be proud of the achievements of fellow Pakistanis who have sought or are seeking to break over 13 new world records. But that does not alleviate the enigma and still makes us wonder, why?

First, at the Punjab Youth Festival and then at the Lahore Expo Centre, with Guinness World Records officials in attendance to rule fair judgments, students and others broke Guinness world records in tasks such as the highest number of people simultaneously singing the national anthem, the most martial arts kicks in three minutes, as well as wiring a plug, setting up a chessboard and making roti in the shortest amount of time. Although one must admit that mixing ingredients, kneading dough and cooking three rotis in three minutes and 14 seconds is quite impressive, one must ask where the funds for all these activities came from and why did setting world records suddenly become a priority. Was the taxpayers’ money used for this, when it could have been used for fighting crime, helping the destitute or going towards the numerous other critical requirements of the country?

The point is not to express disapproval of holding a festival for the youth of Punjab — in fact, this is a positive development — but to say that this, perhaps, should not necessarily be a priority in this hour of need and desperation for the country, given our strained resources and socioeconomic and political situation. Albeit, this reinforces the idea that Pakistani citizens possess talent and still have passion, whether it is patriotism or a competitive nature that is the driving force behind their achievements. Nonetheless, it also reinforces the idea that our country has its priorities mixed up.

An important visit to South Waziristan