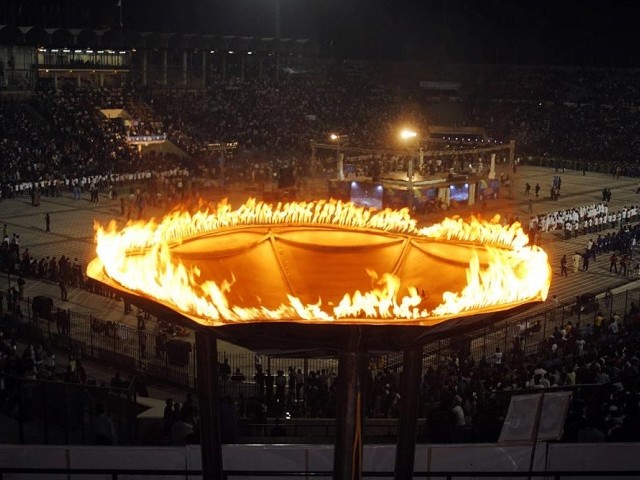 LAHORE: As many as 44,200 Pakistanis sang the national anthem together at the National Hockey Stadium, Lahore on Saturday to set a new world record, breaking India’s record.

The event was organised as part of the ongoing youth festival in the province.

The participants arrived at the stadium earlier during the day and practiced the national anthem for hours. It was earlier reported that 70,000 people had sung the anthem, however the official score put the figure at 44,200.

Guinness World Records adjudicator Gareth Deaves said that he was impressed with the enthusiasm shown by the youth of Punjab and he was amazed to see a big gathering at the National Hockey Stadium.

“It is a very important day for the people of Pakistan, specially Punjab as a big audience has gathered here to create new records in many events including singing of national anthem and creation of Pakistan flag by the audience present in the arena ,” he told the media.

Gareth said that the GWR team was very impressed to see the enthusiasm of the people of Pakistan and he was glad to see the interest of people attempting to create new records for GWR.

The previous record was set by India when 15, 243 people sang the national anthem simultaneously earlier this year.

Earlier in August, an attempt was made to set a new world record in Karachi when thousands of students gathered on University Road to sing the national anthem.

A similar event was staged in Karachi last year when as many as 5,857 people gathered at the Khadda Market ground to make a new record. While the numbers were enough to break the then record of 5,248 people singing the anthem simultaneously, no Guinness officials were present at the event, meaning it was never chalked up as an official record attempt.