Chacha Pakist­ani went to the border everyd­ay adorne­d in his kurta made out of a flag of Pakist­an.
By Asad Kharal
Published: October 21, 2012
Tweet Email 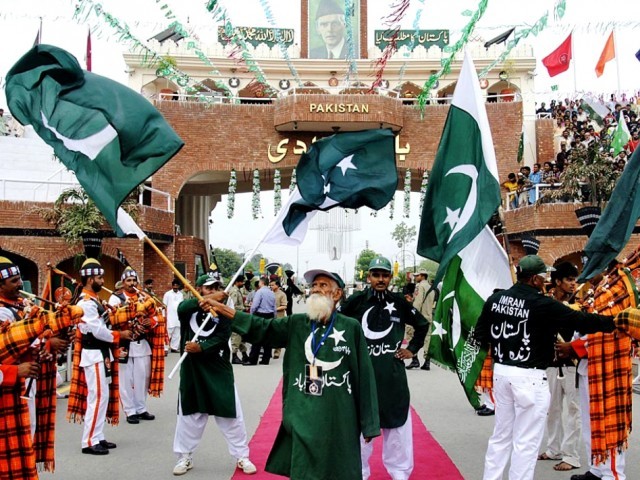 Chacha Pakistani went to the border everyday adorned in his kurta made out of a flag of Pakistan. PHOTO: ONLINE

LAHORE: Chacha Pakistani, the man who come rain or shine would reach the Wagah Border for the flag ceremony, passed away at the age of 90 on Sunday.

If you have ever been to the Wagah Border, you would have seen Chacha Pakistani dressed in the Pakistani flag and waving one around too.

His real name was Mehar Din. He was born in 1922 and was unmarried. While his brothers migrated to Pakistan at the time of its creation, Chacha came here post partition. He had no home of his own and lived with his nephews.

Speaking to The Express Tribune, Chacha Pakistani’s nephew said: “Ever since we were born, we have seen him go there [Wagah Border] routinely.”

“He loved military rule and disliked democratic governments,” the nephew added. Former president Parvaiz Musharraf had sent him for Umrah on a political quota.

He also revealed that his uncle had no source of income and made a living out of money people would hand him at the border.

Living some 40km away, he would hitch hike to Wagah every day, getting out of one car and getting into another – willing to even walk to reach his destination.

Chacha Pakistani had also received awards and certificates from Rangers and other officials visiting the border.

Devoted to Pakistan and a true patriot, Chacha Pakistani went to the border everyday adorned in his kurta made out of a flag of Pakistan.

He had this eccentricity, his nephew said, where he believed the flag of Pakistan should never touch the ground. They said he was almost scared of it happening.

The cause of his death remains vague as his family did not have money to take him to a hospital. All that is known is that he had had a fever and cough since the past few days.

Amazingly, no one from the border wanted to know why the man who religiously went there every day had stopped coming.

Chacha’s hometown was a village in Punjab called Chandrai where he will be laid to rest today, wrapped in his beloved green and white flag.

Correction: An earlier version of this article erroneously stated that Chacha Pakistani was born in 1992. The error has been fixed.