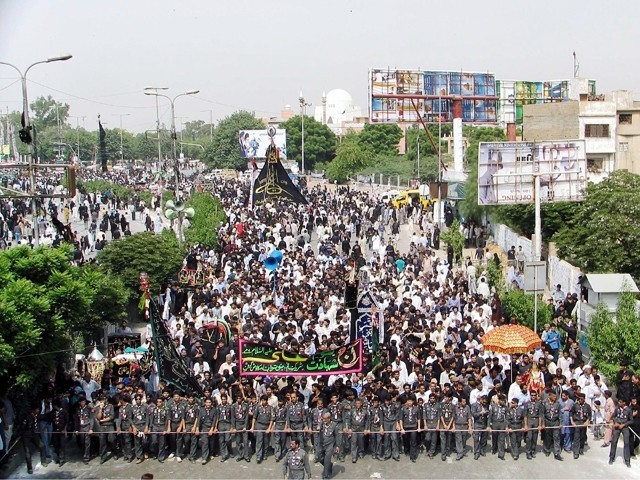 Seven people were injured in a firing incident at Empress Market in Karachi when unknown assailants attacked a Yaum-i-Shahadat Hazrat Ali (RA) procession.

Police and Rangers arrested twelve suspects and cordoned off the area. The injured were shifted nearby hospitals.

According to Express 24/7 correspondent Ahmed Jung, the shots came from nearby buildings. According reports, the attackers did not come from anywhere, they were rather waiting in certain buildings in the area.

The incident took place despite the presence of four thousand policemen and Rangers personnel who were guarding the procession.

The procession started from Nishtar park and had reached Empress Market when the incident took place. However, the procession continued to move towards its destination.

Earlier leraders of the Jaffaria Alliance Pakistan had demanded the government increase security on Yaum-i-Ali (RA).

Security was supposed be tight and police and rangers were to be deployed at sensitive spots, mosques, imambargahs and along the route, while medical camps were be set up along the route with a main one at Numaish roundabout by Al Abbas Scouts Group.

The incident took place despite the presence of four thousand policemen and Rangers personnel who were guarding the procession.

US adds TTP to blacklist