US pushes Afghans as security deteriorates

US pushes Afghans as security deteriorates

The questi­on is: do Afghan­s have the capaci­ty and willin­gness to go it alone in the face of such a resili­ent enemy?
By AFP
Published: October 16, 2012
Tweet Email 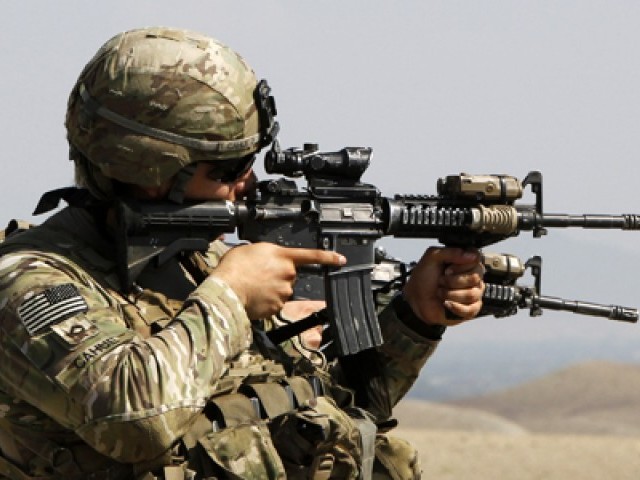 The question is: do Afghans have the capacity and willingness to go it alone in the face of such a resilient enemy PHOTO: REUTERS/FILE

BARAKI RAJAN: As the smoke drifted across the field after the explosion, Private Ryan Thomas lay on his back, blood spattered over his face and teeth and his right sock soaked red.

This is Baraki Rajan in Logar south of Kabul, a province which US commanders describe as a key battleground in the fight against the Taliban insurgency.

Firefights in the Baraki Rajan district are already frequent. The pockmarked walls of the gym on the US outpost bear witness to mortar, grenade and artillery attacks.

But Thomas was the first American hurt by a roadside bomb since the current crop of troops arrived at their outpost in July.

Despite another sign of worsening security in the area, US officers here — as elsewhere in Afghanistan — are pushing Afghan forces into a more independent role.

They are spurred by the unprecedented insider threat that has seen 51 Western soldiers killed by their Afghan colleagues this year and the 2014 deadline for foreign troops to withdraw.

The question is: do Afghans have the capacity and willingness to go it alone in the face of such a resilient enemy?

US commanders say a record number of foreign fighters flooded in over the summer, many from Pakistan. They were capitalising on the assassination of a popular police chief as well as public fury at a NATO air strike that killed up to 18 civilians in June.

Officers now fear that bombs like the one last Saturday could become a growing threat, with Taliban fighters bedding down for the winter and less inclined to fight toe-to-toe.

Colonel Andrew Rohling, commander of 173rd Airborne Brigade Combat Team with soldiers spread across Logar and neighbouring Wardak, said these were “key” provinces as forces try to maintain a security ring around the capital.

He said militants including those loyal to the Al-Qaeda-linked Haqqani network whose leaders are based in Pakistan, are jockeying for influence ahead of 2014.

“If you’re Haqqani and you want to have a say in what happens after 2014 but don’t posture yourself geographically or politically you’re not going to have a say. So you’re seeing a lot of this posturing, especially as you get closer to Kabul.”

US officers say the insider attacks have have had the positive effect of forcing Afghan police, soldiers and intelligence to work more closely together, and become more proactive and independent.

Afghans based in Baraki Barak, near Baraki Rajan, have patrolled without the Americans since NATO cut back joint operations last month due to the insider attacks.

In Logar, the United States has already reduced the number of its bases from 16 to nine. Six weeks ago US troops handed control to Afghans in violence-plagued Kherwar in the south of the province.

Since then, US Lieutenant Colonel James Wright, commander of 1st Squadron (Airborne), 91st Cavalry Regiment, 173rd, says there have been only two attacks on the local base.

“In the case of Kherwar you can make a very strong argument that we were the source of instability as opposed to the solution for instability,” he told AFP.

But Afghan commanders complain of a lack of support and fear the Taliban will gain ground.

Captain Abdullah Ardil said attacks had dwindled because the army refused to patrol far out of their base, while the Taliban presence in the area had increased.

Like many Afghan commanders, he wants more weapons, security personnel and air support.

“In Kherwar they didn’t get enough personnel and they weren’t given night vision goggles,” he said. “If that happens here the security will be very bad.”

But after 11 years of war, billions of dollars and more than 2,135 US soldiers killed, American military engagement is in decline.

Top brass no longer talk of winning but of leaving an Afghan force capable of withstanding the insurgency. But in Baraki Barak, relations are often tense.

Last week Afghan soldiers broke into a US food store and ransacked supplies. The week before, returning from a night patrol, they broke down the gate because they did not want to wait for a key.

Wright says the Afghans must succeed without resources like US helicopters and drones. “They beat the Soviets, they beat the British. I know they don’t need all that technology,” he said.

“They need confidence, they need good leadership, they need flexibility. An Afghan victory just looks a lot different to a US victory.”

Thomas was wounded as soldiers searched vehicles for weapons and ammunition along a dirt road — a dangerous operation that leaves them vulnerable to suicide and car bomb attacks.

After the blast, medic Reginald Dean rolled around with his hands on his ears with concussion.

But seeing his wounded comrade, he stepped into action, cutting away the 21-year-old’s bloodied trousers to reveal a wound to the right calf and two deep lacerations to the left buttock.

“This is gonna suck,” he said before using his fingers to push gauze deep into one of the holes to stop the bleeding.

After surgery, Thomas was to be flown to a US base in Germany to recuperate.

“You’ll soon be having a beer back in Germany,” one comrade said as Thomas was stretchered across the field to an emergency helicopter.

For the Afghans, there will be no such relief.