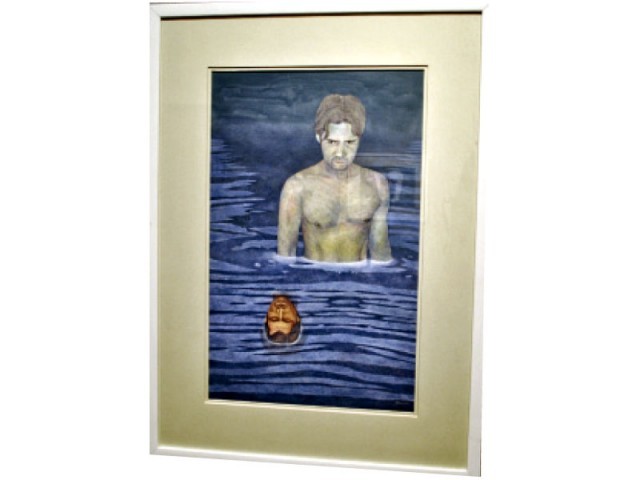 Exhibition to continue till October 19.

The painting on a seven-by-eight inch wasli sheet depicts a head enveloped in a transparent polythene bag. To its 26-year-old creator, Shamsuddin Tanwri, it signifies social suffocation.

The artist has expressed his “disassociation from Lahore” in 21 works on display at the Drawing Room Gallery.

Most of Tanwri’s work consists of self images. Glass shards and polythene in shades of deep blue, charcoal black and ocean green portray discomfort and dislocation.

Some paintings also incorporate images of some friends.

“At the NCA hostel, I was always surrounded by artists from all parts of Pakistan. Together, we recounted the practices specific to our regions and how we missed them, said Tanwri. The latest works, which took him about a year to paint, were an extension of his thesis work, he said. “I had used images of myself and my wife earlier but here I have also used faces of fellow artists who have left Lahore for better opportunities.”

In two sketches, he has drawn legs, placed vertically, but moving in a circle. In another, legs are shuffled horizontally to also form a circle. “The pieces show struggle. One can not be separated from one’s roots, no matter what path one takes. Struggle is a circle. We go back to teaching our children what we learnt from our elders,” he said.

In another piece, a person stands in water staring at his face, depicted as dead and floating on top of the water body.This is an image of a friend. He did not feel at ease in the urban environment. It is an unhappy reflection of self,” Tanwri said.

‘Within Without’, the artist said, reflected a split image of Shikarpur, his hometown, and Lahore, the city he has relocated to for better opportunities.“I think my work equally depicts my skills and my sense of alienation,” he said.

Tanwri decided to move to Lahore after spending a week with RM Naeem, an NCA professor, in the summer of 2001. He relocated upon being admitted to the National College of Arts in 2005. He graduated in 2009 and has stayed on.

“I could have gone back, but there is very little respect for art in Shikarpur. My relatives opposed my choice of career as well as my decision to move here. In Lahore, I am constantly absorbing criticism. It helps one improve one’s work,” he said. His work will remain on display until October 19.