The red carpet was rolled out for as many as 800 guests at the Relian­ce Media Work, Film City, Gorega­on.
By IANS
Published: October 11, 2012
Tweet Email 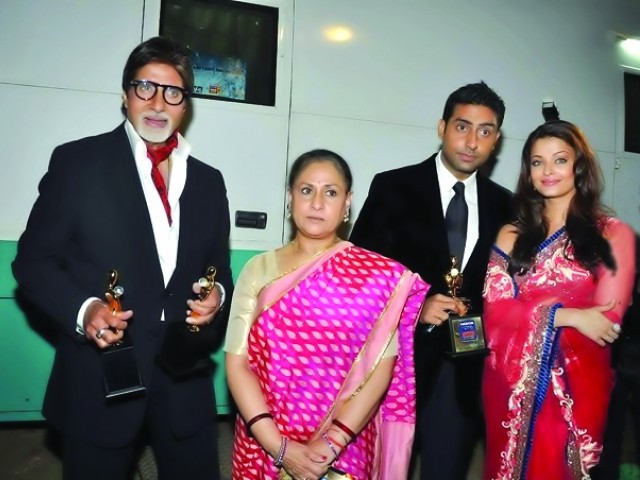 The biggest stars from the Indian film industry were present at the event. PHOTO: FILE

The red carpet was rolled out for as many as 800 guests at the Reliance Media Work, Film City, Goregaon.

Bachchan, dressed in a black velvet outfit, came with his family — wife Jaya Bachchan, son Abhishek, daughter Shweta and daughter-in-law Aishwarya Rai — and he too walked the red carpet with a live orchestra playing hit numbers from his films.

Big B, who turned 70 on Thursday, told media, “Thanks for coming”, while Aishwarya, flaunting a cream long dress with golden detailed work all over, told reporters, “We are so happy that we are all here today celebrating his birthday. Thank you so much.”

Big B’s one time competitor Vinod Khanna, who rarely speaks to the media, was in a generous mood and said: “I wish him all the happiness and good luck.”

Shabana Azmi called him an “iconic figure” and added: “I got an opportunity to work with him. He is my favourite.”

Madhuri wished him all the “happiness and success”, while Juhi Chawla said: “I respect him, admire him and I had a great time working with him.”