Rs10m reward to anyone who identifies Malala’s attackers: Mian Iftikhar

Rs10m reward to anyone who identifies Malala’s attackers: Mian Iftikhar 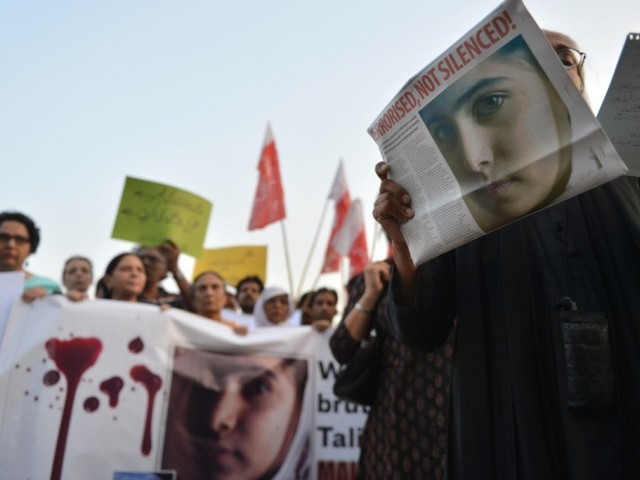 Civil society activists carry placards and papers with a photograph of the gunshot victim Malala Yousafzai during a protest rally against the assassination attempt on Malala Yousafzai, in Islamabad on October 10, 2012. PHOTO: AFP

Hussain requested all peace-loving people from across the world to pray for the early recovery of Malala who was shot by Taliban gunmen on Tuesday while she was on her way to home from school.

The minister reiterated that Malala is not being sent abroad for further treatment as the doctors had advised her complete rest for two days.

The Tehreek-i-Taliban Pakistan (TTP) had claimed responsibility for attacking Malala and had called her “pro-West”.

Malala began standing up to the Pakistani Taliban when she was just 11, when the government had effectively ceded control of the Swat Valley where she lives to the militants.

The National Assembly unanimously adopted a resolution against the terrorists and saluted the services and courage of Malala.

“This House salutes the great services of Malala Yousafzai. The entire nation is proud of her and condemns the incident in which Malala was injured along with two fellow students Shazia and Kainaat,” said the resolution.

The House also pledged to continue fighting terrorism till it is rooted out from the country and demanded the government to bear all medical expenses of the injured students and give exemplary punishment to those involved in the attack.

The Senate also passed a unanimous resolution condemning the terrorist attack on Malala.

As many as 200 people gathered outside Lahore Press Club on Wednesday to protest the attack on Malala.

The protest arranged by the Lahore wing of Pakistan Tehreek-i-Insaaf (PTI) lasted for about an hour during which the participants chanted anti-Taliban slogans, carrying a banner in Urdu reading, “We want our daughters to be like Malala…. We pray for her recovery.”

Workers of other parties including the Labor, the Workers’, the National Student Federation and Bond Labour Federation Front joined the protest at around 6pm. Carrying a banner reading, “Those with guns fear an unarmed girl,” the protesters chanted anti-Taliban slogans.

Some NGO workers also peacefully protested the attack. Children of various government schools along with their teachers joined the protest walking from the Charing Cross to the Lahore Press Club.

A protest was arranged at the Liberty Roundabout as well.