The move to freeze the assets comes six days after the actual incide­nt.
By Our Correspondent
Published: September 19, 2012
Tweet Email 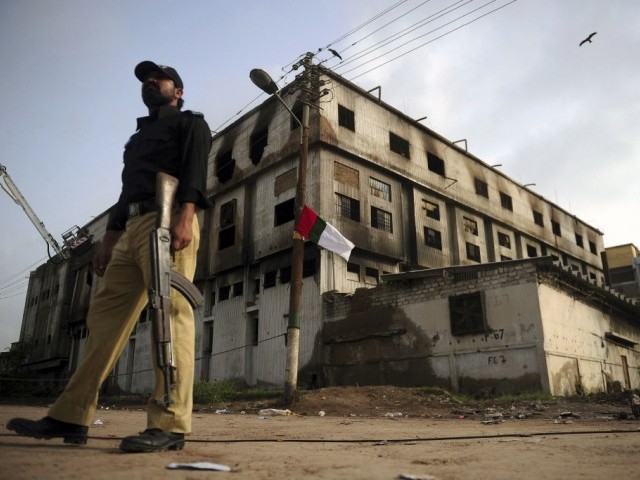 The move to freeze the assets comes six days after the actual incident. PHOTO: AFP/FILE

The State Bank of Pakistan (SBP) asked all banks on Monday to freeze the assets of the owners of Ali Enterprises’ factory, which was engulfed in flames on September 11, killing at least 260 workers that were trapped inside.

The notice was sent to the banks in the evening after a lower court asked the central bank to stop the people nominated in the police complaint from moving their assets elsewhere.

“We have issued the orders,” an SBP spokesman said without sharing further details. “There are 40 commercial banks involved and nothing can be revealed about the amount being frozen.”

Ali Enterprises, a member of Pakistan Readymade Garments Manufacturers and Exporters Association (PRGMEA), had annual sales of around Rs5 billion, according to SITE Association of Industry’s Chairman Irfan Moton.

The move to freeze the assets comes six days after the actual incident, raising questions about its efficacy as it might have allowed the accused sufficient time to move the money elsewhere, said a senior banker.

The owners have obtained a bail from court.

As part of their investigation, FIA questioned the staff at SITE Limited Company, which is responsible for clearing building designs of factories in the industrial estate. Initial investigations have showed that the factory did not have enough emergency exits and the design was approved because the SITE’s bylaws are silent on the subject.

No one from the FIA was available for comment.