Ultimatum to US: ‘Criminalise blasphemy or lose consulate’

Ultimatum to US: ‘Criminalise blasphemy or lose consulate’ 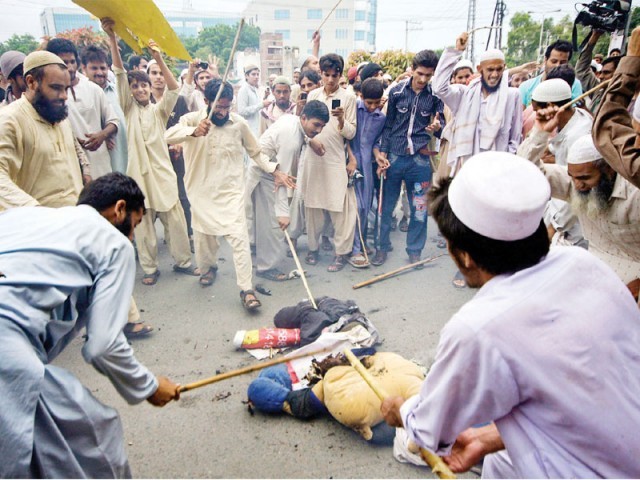 Angry protesters push at a barrier, burn an effigy in front of the American consulate on Sunday. PHOTO: SHAFIQ MALIK/EXPRESS

Several Muslim parties and a Christian group held rallies on Sunday to protest against a movie released in America.

Around 10,000 people participated in the main rally organised on The Mall by the Tehreek Hurmat-i-Rasool (THR). The participants marched from Nila Gumbad to Masjid-i-Shuhada on The Mall. Despite a ban on rallies on The Mall, the road remained blocked for vehicular traffic from noon to 6pm.

One of the participants of the rally, Abdullah Ismail, passed away after he was taken to Mayo Hospital. Witnesses said he had complained of feeling unwell from the smoke from US flags burnt at the rally.

Hafiz Saeed alleged that the film, Innocence of Muslims, had been produced with the backing of US establishment. He said the director, the producer and all those involved in the production and release of the movie must be hanged publicly. “The US must make a law against blasphemy – or we will not let the US consulates in Pakistan function,” he said.

He said a resolution condemning the movie in the parliament was not enough. Instead, President Asif Ali Zardari must announce jihad against countries like the US that supported attacks on Islam. The Organisation of Islamic Countries Conference should announce a boycott of US goods. Ijazul Haq, the PML-Z chief, said the people had shown their loyalty to Islam. He said the government leader’s silence was shameful. He said no one had dared commit blasphemy during his father Ziaul Haq’s rule.

Shabab-i-Milli, the youth wing of the Jamaat-i-Islami, also held a rally near Punjab University’s new campus.

Speaking to the gathering, Jamaat-i-Islami Ameer Munawar Hasan said the film had been produced by a Zionist with US support.

He said, “If the US claims to be a civilised nation, why does it stoop to insult other religions and civilisations?”

JI general secretary Liaqat Baloch said the US stooges ruling the Muslim world were on the run now. They had met a humiliating fate in Tunisia, Egypt and Turkey. He said Pakistan was on the threshold of a revolution.

A small protest rally against the film was also taken out by a group of Christian from Model Colony, Gulberg. The rally concluded at Seven Up Chowk having marched through Mecca Colony.