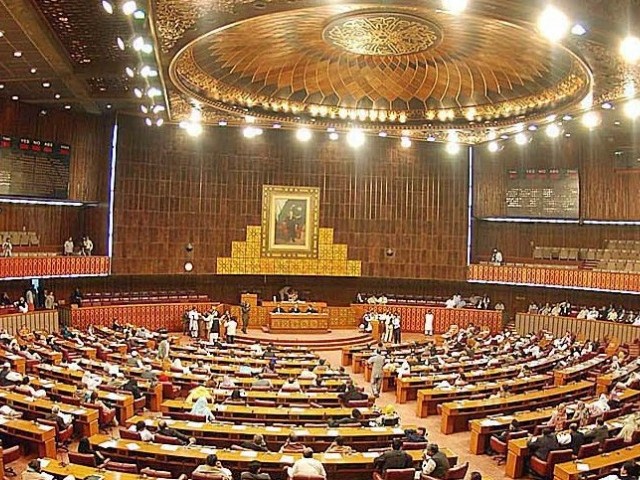 The resolution called for fixing responsibility, especially against the owners of the factories, for ignoring laws pertaining to safety of workers. PHOTO: APP/ FILE

A charged National Assembly unanimously adopted two resolutions on Thursday – one calling for a judicial probe into the twin industrial infernos that claimed 259 lives in Karachi and over 23 in Lahore, and the other condemning an online video containing blasphemous content.

The resolution on factory fires recommended that the provincial governments of Punjab and Sindh form a judicial commission to probe the causes of these incidents.

Members of the house mourned the victims of the fire incidents, and expressed sympathy with their family members. The resolution called for fixing responsibility, especially against the owners of the factories, for ignoring laws pertaining to safety of workers.

“It should also fix responsibility on government servants for not enforcing and implementing relevant rules and laws,” the resolution demanded.

Besides calling for registration of criminal cases against the culprits, the resolution also urged necessary legislation to prevent a repeat of such tragedies.

It also called for providing compensation to the heirs of the victims and the injured.

The lower house also condemned an online video containing blasphemous content, a day after protests erupted across the Muslim world and resulted in the death of the US ambassador to Libya.

Lawmakers from across the political spectrum called the incident ‘shameful’ and ‘derogatory’ and demanded that YouTube, the platform which hosts the video, remove the 14-minute clip.

Some lawmakers suggested that the government go beyond mere condemnation of the incident, but did not specify how that should be done.

The resolution came on the heels of an overnight condemnation by the foreign ministry, and subsequent government orders to the telecom regulator to block the video in Pakistan.

There were also calls by political parties to hold protest rallies against the video on Friday.

Moved by federal law minister, Farooq H Naek, the resolution said the defamatory film, timed with the commemoration of 9/11, provoked hatred within societies and between people of various faiths.

“The event has deeply hurt the feelings of the people of Pakistan and Muslims all over the world,” it mentioned.

Pakistan is a strong proponent of interfaith harmony and believes all manifestations of extremist tendencies must be opposed, the resolution said.

“What sort of freedom of expression is this … you have been hurting the sentiments of Muslims through such actions continuously,” said Opposition Leader Chaudhry Nisar Ali Khan.

If corrective measures are not taken, the unrest would spread throughout the Islamic world, Khan said.

He condemned the killing of the US ambassador in Libya, and said that there should be proportional condemnation for when Muslims are hurt.

Meanwhile, Pakistan Muslim League-Nawaz (PML-N) minority member Dr Nelson Azeem called for a ban on the video and said that every Christian in Pakistan condemns this act.