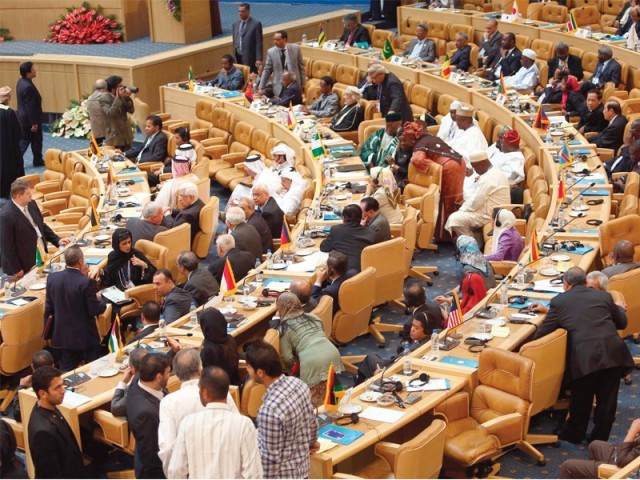 Delegations attend the last day of the NAM summit in Tehran. In his speech, President Zardari stressed on the importance of multilateral ties among nation states. PHOTO: APP/AFP

As western countries wrap up their decade-long mission in Afghanistan and pack their bags for the 2014 withdrawal, the war-torn country’s neighbour reminded them that they need to take care of the refugees.

“We hope the international community, while planning their withdrawal from Afghanistan, would also take into account the repatriation of Afghan refugees to their homeland,” said President Asif Ali Zardari while addressing the 16th Summit of the Non-Aligned Movement (NAM).

He said the repatriation of Afghan refugees is an unfinished task that is imperative for ensuring peace and stability of the country.

Pakistan will support an Afghan-owned and Afghan-led reconciliation process, the president reiterated, adding the two states had ‘interconnected destinies.’

President Zardari said that Pakistan will stand by its Afghan brethren even after the international community withdraws from Afghanistan in 2014.

Heroin as a war weapon

The president also raised the issue of narcotics in his speech, saying that heroin has developed as a ‘war weapon’ in the hands of insurgents.

Previously, when the international community withdrew from Afghanistan, they left behind heroin as a weapon of war, he said.

The drug trade has become the financial backbone of terrorism and has wreaked havoc in the region, he added.

The president was in full praise of the summit, saying it represented the aspirations of half of the population of the developing countries. He added that the greatest strength of the Non-aligned Movement is that its leaders had successfully defeated imperialism and apartheid in the 20th century.

He said that Pakistan would be pleased to actively contribute to the strengthening of the movement, whose member states represent nearly two-thirds of the United Nations’ members and comprise 55 percent of the world population.

Talking about the eastern neighbour, the president said that Pakistan is engaged in a comprehensive dialogue with India, and, together, the two neighbouring states aim to bring about a peaceful resolution of all outstanding issues including the Kashmir issue.

President Zardari categorically demanded the end of the Syrian crisis and said that democratic aspirations of the Syrian people must be respected.

He also strongly condemned the unilateral declaration of independence in parts of Mali and extended full support to the government and the people of Mali in their struggle for maintaining territorial sovereignty.

Speaking on the issue of Palestine, the President said that Pakistan respected the rights of the people of Palestine for self-determination. He added that the establishment of Palestine as an independent state was critical to world peace.