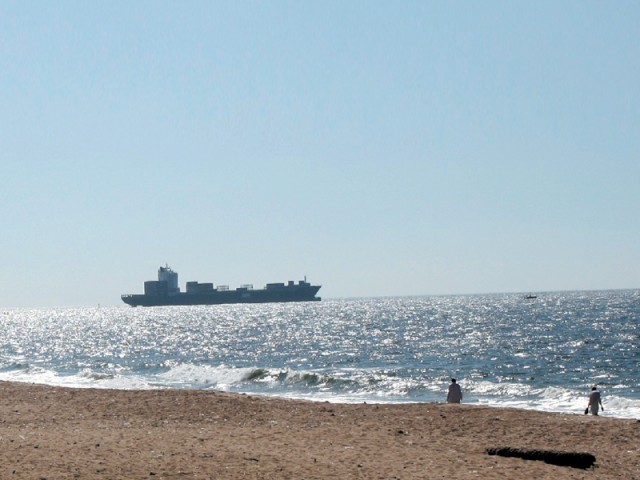 In a city that roils with conflict, Manora refreshingly retains its age-old diversity.

Standing atop the seaward wall of an ancient fort, a soldier licks off the salty vapours carried by the dawn mist to his lips. The Talpur rulers of Sindh had built this fort to fend off foreign ‘adventurism’ and it served that purpose faithfully till the arrival of the British. The bellows from a container ship’s horn reverberate in the tranquil morning air doesn’t seem to distract either him or the flocking seagulls, who seem well accustomed to man-made disturbances in their natural habitat. Turning back, the soldier brushes his hand over the cold barrel of a huge gun facing the sea. Perhaps he wonders if The Guns of Navarone was shot here. It certainly looks the part.

This is Manora, a part of Karachi that is connected to the mainland by a narrow stretch of land running through the waters of the Arabian Sea. It is thanks to this little land corridor that Manora cannot be called an island; it is in fact a peninsula that nevertheless has the soul of an island. Because just as life on islands is preserved through isolation and evolves without external influences, the aura of Manora has neither been contaminated by development nor religious extremism. Free from the taint of the mainland, it has managed to retain its old monuments and disparate cultures to this day.

Across the street from where I stand, a choir enters St Paul’s Church (built in 1865) in preparation for Sunday Mass. The priests enter just as the Imam exits the mosque next door for his morning walk towards a Hindu temple nearby. Close by, a qawwal party leaves the shrine of Sufi saint Ghazi Yusuf Shah after a night of spiritual music.

Local fishermen pay their respects to this saint on their way out to sea by bringing their blue boats near the shrine and praying for a safe and bountiful journey. And while Abdullah Shah Ghazi may be better known, Ghazi Yusuf Shah is also one of the four saints credited with protecting the four corners of Lady Kolachee’s city from disaster.  His holy presence is credited with miraculously thwarting enemy attacks and diverting countless typhoons that created havoc elsewhere but left Karachi unscathed, even when the first lashes of coming storms were visible from Manora.

Towering above all other buildings is the famous Lighthouse. A testament to British engineering, it still functions on the original wind-up mechanism put in place over 120 years ago. It may be unnecessary to draw a comparison with modern Karachi, where something installed just a month back will tend to go kaput with frightening speed, but I can’t help but gaze at it in wonder and envy. Of course, the kerosene lamp which originally illuminated the waves now desolately gathers dust in the warehouse, replaced by a made-in-China fluorescent bulb. This is how, in Manora, the mystical and the scientific have joined forces to guide sailors to safety through many tempests.

Walking down from the shrine and along the beach, our party of two — my foreigner friend and I — comes across a bazaar. We evade a merchant selling mirrors decorated with cowries and ashtrays made from oyster shells. A little boy invites us to taste his father’s freshly fried fish at their café and we decide to give it a try. Moments later, our fish — the most overcooked we have ever had — arrives beneath thick coats of an orange batter and aromatic herbs. The woody-tasting fish is as fresh as the lighthouse, we joke to ourselves, and comes with a cup of hot liquid which the boy calls tea. One sip of the nauseatingly sweet tea, and my friend decides he knows exactly why there is a sugar crisis in Pakistan.

I share my wooden bench at the café with a jogi snake charmer and his traditional patchwork bag. He is here in Manora for his weekly expedition, looking to earn an extra buck or so from the throngs of visiting picnickers. The boy discreetly points us out — his urban and foreign customers — to passers-by as if to endorse to them the popularity, and palatability, of his father’s fish. And while he is at it, we sit mesmerised by the beauty of the centuries-old stone temple built just where the Arabian Sea kisses land. The exotic vision, the chewy fish and the hot, ultra-sweet tea, the blaring Indian music from the pan shop next door mixed with the prayer calls from the mosque, and the choir chants still resonating in our heads from earlier that morning, make for an unforgettable experience.

From the tea shop, we reluctantly make our way to the jetty from where a ferry would take us back across the polluted channel to the main city that sadly seems to have lost the diversity that still thrives in Manora. As if corroborating my impressions, our boat arrives overflowing with creatures of all castes and creeds. A group of burqa-clad women covered in black overalls is teased by a monkey, a goat and a dog, all belonging to a gypsy performer on the boat. Equally irritated by the unwanted animal advances are Hindu women in multi-coloured saris and over-sized crimson bindis, returning from a visit to the temple. Children from a large family giggle at the predicament of both sets of women, while our amused smiles are returned by sheepish glances from the troubled ladies.

Like the gypsy’s signature patchwork bag, Manora’s diversity is reminiscent of Karachi’s multicultural past — and all that is sadly in stark contrast with its increasingly monochromatic present.

This piece was originally submitted for the British Council’s creative writing competition.

Hottie of the week: Ammar Belal