This is the second such incide­nt to occur in the area within two months
By Our Correspondent
Published: August 7, 2012
Tweet Email 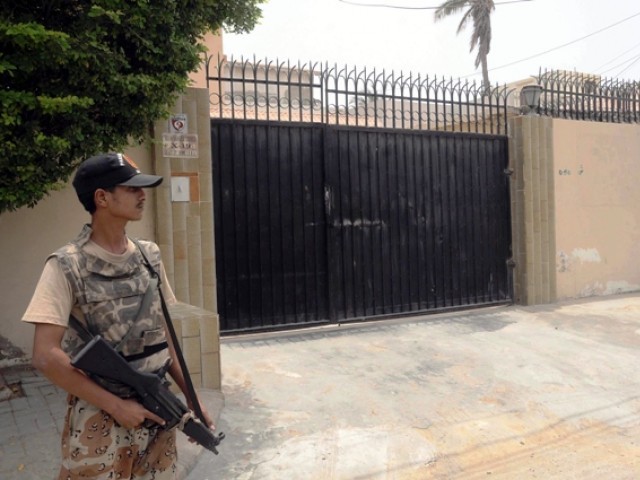 On Monday a hand grenade was lobbed at his house. Mercifully, it did not detonate. PHOTO: EXPRESS/MOHAMMAD AZEEM

KARACHI: The past month has been a nightmare for businessman NA and his family as a gang threatened him to pay extortion money. He ignored them and went to the police, hoping that they would take action. For a week, there was silence.

On Monday a hand grenade was lobbed at his house. Mercifully, it did not detonate. Earlier in the day, NA had received a text message saying that a defused grenade had been thrown inside his house. This prompted the family to search the garage, where they were shocked to discover one under the car.

“The culprits have been using the same numbers but the police have still not been able to shut them down,” said F, NA’s son. “They had asked for Rs5 million a month back.” The last text message sent by the gangsters stated that next time, a live grenade would be used.

The businessman had approached the police’s Special Investigation Unit (SIU) a few days ago. A complaint was also lodged with the Citizens-Police Liaison Committee’s office in Korangi Industrial Area where NA’s mill is located.

The criminal named in the case is Ahmed Ali Magsi, a man who came into the limelight after being named for murdering Muttahida Qaumi Movement activists in PIB Colony on March 27.

“Magsi said he is associated with a Lyari-based gang. We have no idea how he got our contact numbers or details about the business,” said F. “But there are so many workers in the factory. Anyone could have leaked the information to him.”

He said that the SIU has confirmed that calls were made by Magsi. “It is actually him. It’s not like someone is just using his name.”

It has become common for Karachi’s businessmen and traders to receive extortion slips and letters from people who claim to have political backing and ties with feared criminals. A few weeks ago, another businessman received similar threats and a grenade was thrown at his house, which is also located in DHA.

Clifton SP Dr Farrukh Ahmed is concerned that gangsters are becoming more and more bold in DHA. “We really want to stop this from getting worse,” he said. “We are taking every possible step to control the situation.”

The family did not inform the Clifton police about the threat till the grenade was found, he said. “They should have told us about the threats they had been receiving. I don’t know what measures the SIU has taken. But I want to ask businessmen to tell the police of the area if anything like this happens.”

NA is also a member of the Korangi Association of Trade and Industry, which appears to be helpless against extortionists. “We can only inform the police,” said the vice chairman of the association, Hashim Razzak. “There is nothing else that we can do. We are not a law enforcement agency.”

The officials of DHA also expressed their helplessness. “We are not responsible for securing the life and property of the residents. That is the police’s job,” said a vigilance officer.