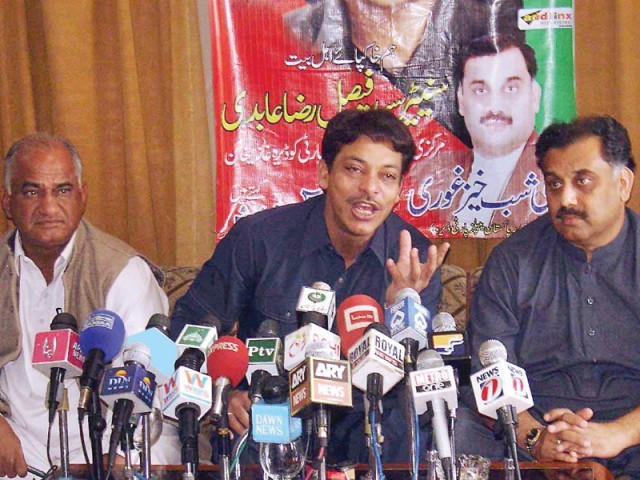 While hurling fiery allegations at Chief Justice Iftikhar Muhammad Chaudhry, Pakistan Peoples Party (PPP) Senator Faisal Raza Abidi on Sunday demanded a resignation from him and other judges who were reinstated under the Provisional Constitutional Order (PCO).

During a press conference in Islamabad, Abidi held Justice Chaudhry responsible for the alleged financial impropriety done by his son, Dr Arsalan Iftikhar.

The senator said that if the chief justice does not tender a resignation, then he will “force him out from the same way he had been restored as a judge.”

“He [Justice Chaudhry] says that he did not have any idea where his son got all that money from…I ask, when the case emerged, did you ask him where he got Rs900 million from?”

The senator produced bank account statements of Dr Arsalan and said that the person who used to “work under somebody else” now owns billions of rupees. He also showed that the billing address mentioned was that of the Chief Justice House in Islamabad.

“You [Justice Chaudhry] are to be blamed for this. This happened right in front of you. You cannot pretend to not know anything. Who gave Dr Arsalan the right to use government’s property for running his own businesses? Could he not rent out an office in some other area?”

He said that he would now “personally” investigate about Dr Arsalan’s assets and will also fly to Dubai and London to inquire about his international bank accounts. “I will probe into the accounts he has activated under the name of mamu.”

Abidi said that the Parliament is supreme and is above other institutions.

“Parliament forms laws and constitutions. Who gave you the right to criticise and meddle in its affairs?”

“I accept your challenge in the war you have waged against the parliament. But mine is not a war of arms, but is a war of words, because Pakistan cannot afford agitation at this moment as it is already going through tough times.”