The city’s water supply might be drasti­cally affect­ed when floodw­aters hit the coasta­l areas of Thatta.
By Tufail Ahmed
Published: August 22, 2010
Tweet Email 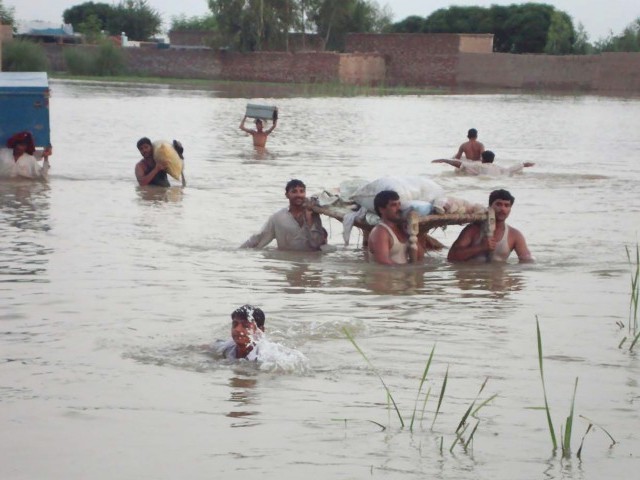 The out break of various diseases is feared. PHOTO: EXPRESS

KARACHI: The city’s water supply might be drastically affected when floodwaters hit the coastal areas of Thatta and flow into the Haleji and Keenjhar lakes – Karachi’s main water reservoirs – causing an outbreak of various fatal diseases in the metropolis.

Health experts believe that as the floodwaters are carrying a large number of animal carcasses, the two lakes are likely to become tainted with harmful bacteria and their water will cause various diseases such as diarrhoea, typhoid, gastroenteritis and hepatitis among the residents of Karachi.

They also say the internally displaced persons (IDPS) arriving in relief camps in the city are suffering from different diseases and if they are not provided timely treatment, the diseases can spread throughout the city.

“If IDPs are not provided proper medical attention at the camps, the whole city will be at risk from waterborne and viral diseases,” warned Dr Tahir Shamsi, an infectious diseases specialist.

A large number of IDPs are also suffering from tuberculosis and liver diseases. The children and women at relief camps might also develop anaemia as food supplies are scarce at the camps.

“Reports of malaria, hepatitis, gastroenteritis, cholera and other diseases cases have started pouring in from various areas of the city,” Dr Shamsi said. “People with a weaker immune system are the first ones to fall victim to viral infections and eventually the whole population gets affected.”

There are also fears that floodwaters will inundate the National Highway in Thatta, suspending traffic to Karachi and causing a depleted supply of vegetables and other commodities to the city.

Cases of dengue virus have been reported in hospitals across the city as the monsoons recede.

At least a dozen people, complaining of high fever, were brought into National Institute of Blood Diseases, Liaquat National Hospital, Ziauddin Hospital, Civil Hospital Karachi and others. Many of them have tested positive for the virus.

The provincial health department has directed that the Dengue Surveillance Cell should be made functional. Provincial Health Minister Dr Sagheer Ahmed has asked the head of the Dengue Surveillance Cell to gather details of dengue patients currently under treatment in all hospitals and ensure provision of facilities necessary to treat the virus in all government hospitals.

Last year, cells splitters machines were supplied to government hospitals of interior Sindh. However, the administration of these hospitals said they do not have kits, which is a significant requirement in the treatment of dengue fever.