Gandhara relics: Stolen or not, police and archaeologists can’t agree on one number

Gandhara relics: Stolen or not, police and archaeologists can’t agree on one number 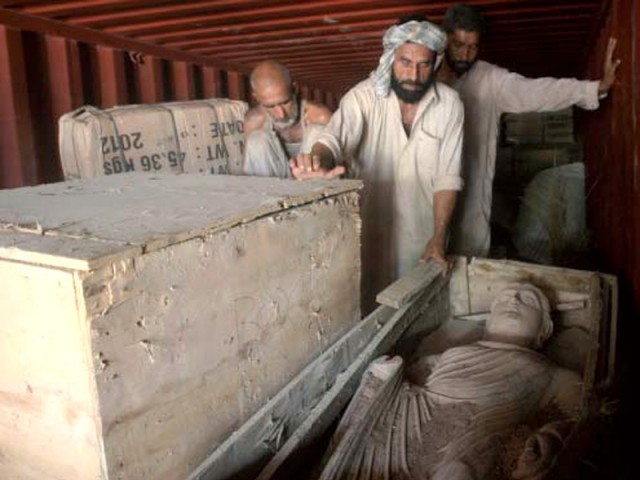 The artefacts will remain at the police station till the next court hearing on July 24. PHOTO: FILE

The police and archaeology experts seem to be at loggerheads over the actual number of Gandhara relics seized earlier in the month.

Amid press reports that some artefacts have been stolen from the Awami Colony police station, both parties associated with the case are coming up with a different total for the statues.

While National Museum’s director Mohammad Shah Bokhari claims to have photographed and documented around 330 pieces earlier, the newly posted SHO at the police station, Hatim Marwat, says there are only 308 artefacts.

The police had seized a container full of Buddhist relics on July 6 and then found some more in a Korangi warehouse on July 8. As the police were investigating the case, archaeology experts, including officials from Sindh culture department and Khyber Pakhtunkhwa’s archaeology department, were called in to record the details of the seized relics.

“We need resources such as forensic analysis to determine the authenticity of each of the relic,” he said. “Right now we don’t have that facility.”

Some of the ancient relics had even been damaged due to the careless handling by police officers and labourers during shifting. The artefacts were dumped in a compound of the Awami Colony police station. Reports in the press suggested that piece by piece, the relics were being stolen due to the casual security at the police station. There were reports that three statues have gone missing, but there has been no official confirmation.

Awami Colony SHO Marwat told The Express Tribune that all of the seized relics were documented by the Sindh culture department officials and have documentation numbers on them.

“It is untrue that artefacts have been stolen [from the police station],” he said. “To our knowledge, there are only 308 pieces. We don’t have information about the rest.”

However, National Museum’s Bokhari told The Express Tribune that photographic evidence and records were available of 330 artefacts. If some have gone missing, it is the responsibility of the police, he added.

“The police have their custody, and we can’t keep check all day and night to see where the idols are and how they are being handled,” Bokhari said. “If they have been stolen, the police are to be blamed [for it].”

The artefacts will remain at the police station until the next court hearing on July 24. It is expected that the court will handed them over to the culture department.

When asked why the Gandhara relics were dumped in the courtyard, the SHO replied: “The statues are not watermelons that need to be kept in a refrigerator. Look at their size and weight. Where else would we keep them?”

Police sources said that the former SHO was transferred as some statues had gone missing from the police station. But Marwat denied this, saying his predecessor’s posting was a routine matter.