An open challenge to the propagandists

An open challenge to the propagandists

There are millio­ns of young folk, who despit­e being educat­ed, know nothin­g of anythi­ng else affect­ing nation­al life.
By Kamran Shafi
Published: July 12, 2012
Tweet Email 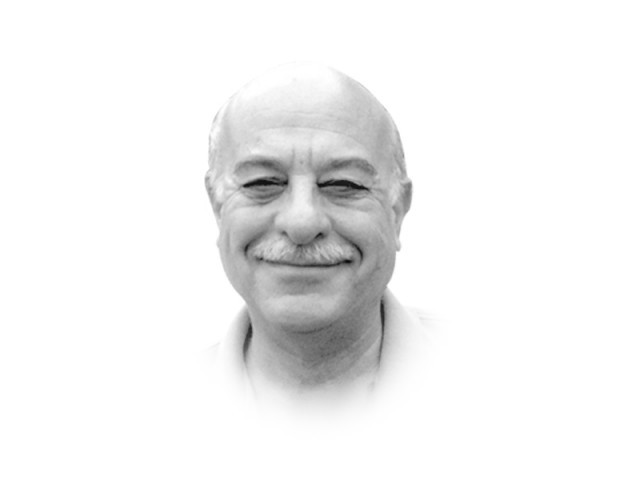 Knowing well where they get their sustenance from; and having faced their slings and arrows for very many years now, I never thought I would ever let trolls get under my skin until very recently, with some of them repeatedly telling white lies about one’s service record; lies which do not have the faintest connection with truth and reality.

One of them actually said on Twitter that I had been court-martialled for raping East Pakistani women when I had never even been posted there! Another beauty writing from the United States no less, said on this newspaper’s great comments section that I had been thrown out of the army because of rank efficiency which is why I bore a grudge towards it. Another codger, this time a retired 80-year old Lt.-Colonel; and yet another failed ISI propagandist, a retired brigadier, passed innuendoes against me on the Pakistanpress mailing group too. And other such tripe.

I should have ignored these ludicrous charges even now if it weren’t for a recent tweet in which someone asked me what the abbreviation CEC stood for. And this in the very midst of people tweeting away about the good news about Justice Fakhruddin G Ebrahim becoming the consensus candidate for Chief Election Commissioner of all the political parties, including Imran Khan’s PTI. I ask you!

It was only then that I realised that there were millions of young folk in this country, who whilst they might be extremely bright in their studies in elite institutions like LUMS, LSE, and so on, knew nothing about anything else affecting national life — not politics; not the people who have played large or very small parts in it over the last 30 or so years, making them ideal targets for disinformation and propaganda against the perceived enemies of our mendacious and utterly crooked Deep State.

Since I have never pulled my punches all my life and I am not about to now, in the late morning of my life, I have decided to throw a direct challenge to the managers/puppeteers/paymasters of these trolls: to those who egg them on with fake information; to those who live and do their dirty doings in the shadows; to those who have already been caught doing to this country what no decent person on the payroll of the state would ever even countenance doing, and if caught would be severely punished.

Please witness Air Marshal Asghar Khan’s 16-year old case before the Supreme Court in which funds collected from various unsavoury, even grotty, sources were collected at the behest of the then president of the Islamic Republic none other; and the Chief of Army Staff, and allegedly distributed among many politicians and others through serving officers of Military Intelligence (MI) and Inter-Services Intelligence (ISI) to rig the 1990 elections.

Here goes then: I joined the Pakistan Military Academy on May 13, 1965, and was commissioned into the 4th Battalion, (Prince of Wales’s Own) The Baloch Regiment on May 8, 1966. I resigned my commission in 1974 and left the army when my resignation was accepted in 1976. I had put in a total service of 11 years, 10 of it in commissioned rank. I hereby challenge the above named managers/puppeteers/paymasters to publish my complete service record, alongside the service records for that same period of their service, of three of the senior-most generals serving in the army today. That should clarify matters as nothing else will.

These people are cowards, however, and will simply not do the right thing, depending as usual on lies and innuendo and rumour and back-biting. Well, shame on them!

Enough of that, and may I now say how disappointed I am at the Public Accounts Committee (PAC) chairman, the good Nadeem Afzal Chan, known for speaking frankly almost brutally, seemingly backing down at the Supreme Court’s registrar’s refusing to appear before the PAC. It is another matter that I am shocked at the SC’s action of allowing the registrar to so refuse as if the honourable court has something to hide.

It is a well-known axiom that the institution that holds other institutions accountable, and by God does our SC more than do that(!), should open itself to accountability too, so that when it is seen that all its acts are indeed aboveboard, including the accounting of government funds, no one would ever dare lift a finger of blame against it. But if it hides behind ‘omnipotence’ it might well be playing with fire.

Indeed, it might well be compared to the army which, too, refuses to appear before the PAC, even its business managers such as Fauji Foundation bosses. Which reminds me: did the IGFC Balochistan appear before the SC bench in Quetta or was it just some junior officers as usual, and their lawyer Raja Irshad? We must note here and now that Raja Irshad is known as the security establishment’s favourite lawyer which raises another question.

Just the other day much was made in the press of how much money the federal government had spent in defending itself in cases particularly before the SC, a newspaper coming up with the amount of Rs70 Million. Might one ask what the Pakistan army, the ISI, and the Frontier Corps have spent in pursuing their cases such as the missing persons and Memogate and Mehrangate cases etc.? Why are only the ‘bloody civilians’ targeted in these matters? Unless of course, Raja Sahib is working free, gratis and for nothing?

As to dual-nationality holders being eligible for elections I can only say that if you are eligible to vote you are eligible to stand in an election. Indeed if Pakistani political parties can collect funds from Pakistani dual-nationals living in their new countries, and they can also vote, i.e., actively affect the old country’s politics, why can’t they stand for elections themselves too?