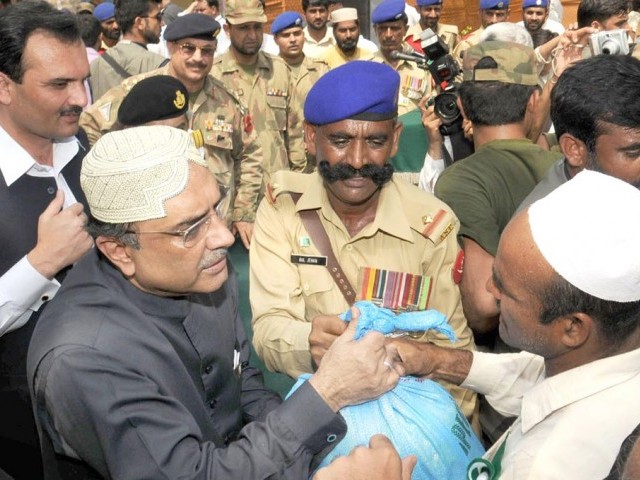 NOWSHERA: President Asif Ali Zardari on Saturday vowed to build a stronger Pakistan following the heavy floods and said all development funds will be used to provide relief to the flood survivors.

“The people and the government of Pakistan stand by you in your hour of trial and we will help you rebuild your homes and lives,” the president said after visiting a relief camp in Nowshera.

“We will not only face this one, but will be better prepared for any future emergency,” he added.

He added that the floods have devastated infrastructure, food storage and homes, and he will seek more assistance from the international community to deal with the crisis.

Later the president flew to Multan in the afternoon to review the flood situation in Punjab.

He flew to Ali Pur, where he spent two hours at a relief camp set up at the Ali Pur Boys High School. He was briefed about the flooding and the ensuing devastation in southern and central Punjab.

The president said that at this year’s Independence Day, the entire nation had risen as one to support those affected by the floods. “We will assess the damage and compensate it fully. The survivors will be given all sorts of compensation,” he said, adding that relief activities needed to be made more efficient and special attention be paid to prevent the spread of disease in camps. (WITH ADDITIONAL REPORTING BY OWAIS JAFFERY)