The West and Israel suspec­t Iran is trying to develo­p a bomb behind the veil of its nuclea­r progra­mme, Tehran denies.
By AFP
Published: June 7, 2012
Tweet Email 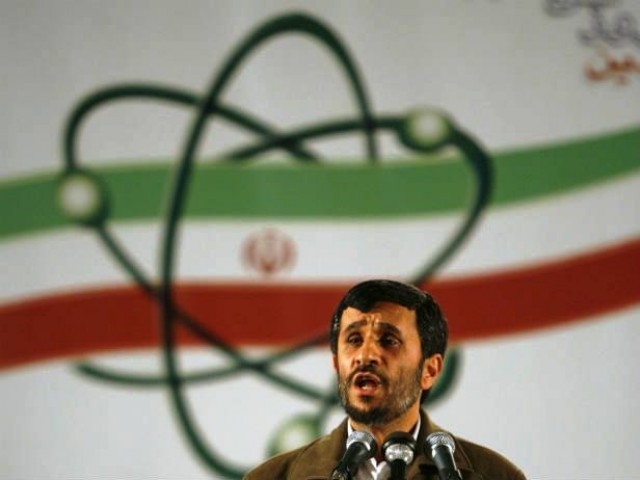 The West and Israel suspect Iran is trying to develop a bomb behind the veil of its nuclear programme, a charge Tehran denies. PHOTO: REUTERS/FILE

VIENNA: The United Nations’ nuclear watchdog will push Iran in fresh talks on Friday to strike a deal on access to sites where Tehran is suspected of working on an atomic bomb, particularly the Parchin military base.

The International Atomic Energy Agency’s representatives will be going into the meeting looking for progress, after its director general Yukiya Amano signaled on Monday that differences between the two parties had ‘narrowed’.

However, the United States’ envoy to the IAEA, Robert Woods, dampened expectations that a deal can be struck at Friday’s discussions in Vienna, saying that he is ‘not optimistic’.

“I certainly hope an agreement will be reached,” he said on the sidelines of a meeting of the IAEA’s board of governors. But he added: “I’m not certain Iran is ready”.

Western powers and Israel suspect Iran is trying to develop a bomb behind the veil of its civilian nuclear programme, a charge Tehran denies.

The IAEA is particularly interested in the Parchin military base near Tehran, where it believes suspicious explosives testing has been carried out. Its repeated requests to visit Parchin in months have been rebuffed by Tehran.

Soltanieh has so far kept an upbeat tone. “We’ll try to continue to work on the text of a structural approach. Hopefully we will be able to conclude it,” he told journalists.

“I’m always optimistic,” he added. “I hope that both sides will be able to find a common denominator.”

Amano made a whirlwind trip to Iran last month after a promising round of talks in Vienna, and said after his return that the two sides were close to a deal. But Western diplomats have since said Iran seems to be dragging its feet.

On Wednesday, the European Union called on Iran to ‘conclude the agreement without further delay’.

The so-called P5+1, the United States, Russia, China, Britain, France and Germany,  revived talks with Iran in Istanbul in April and met again in May in Baghdad, though little was achieved.

Iran and the six world powers are due to meet again in Moscow on June 18 and 19. Barring progress, an EU oil embargo against Iran will come into force on July 1.

Israeli newspaper Haaretz reported on Monday that Israel and the US are also discussing new sanctions against Iran if the Moscow talks fail.

Russian Foreign Minister Sergei Lavrov for his part said Wednesday that more sanctions against Iran would be “counterproductive”.

In November, the IAEA said in a report that it had ‘credible’ intelligence suggesting Iran had worked toward building nuclear warheads.

The watchdog is seeking a deal that would enable it to answer lingering questions raised in the report, which drew on its own information, foreign intelligence and limited input from Iran itself, by giving its inspectors access to all sites, documents and people involved in the nuclear programme.

Parchin base is of particular interest. The IAEA has said new satellite imagery indicates ‘extensive activities’ at the base, which experts see as signs of a clean-up.