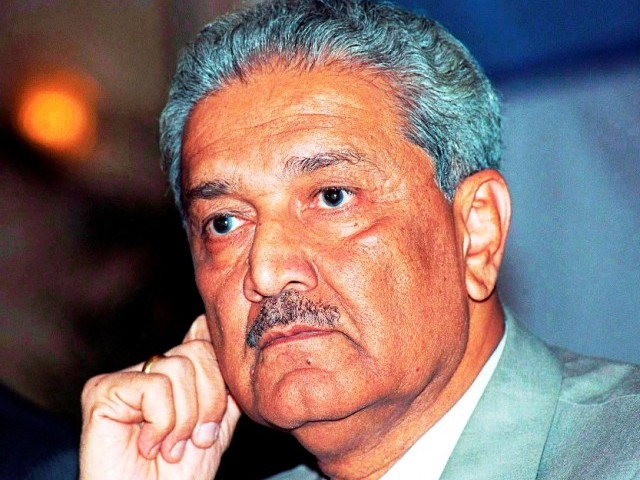 Dr Abdul Qadeer Khan calls the development of the atomic bomb by Pakistan and India a “mixed blessing”. PHOTO: FILE

On a warm May evening, fourteen years since that fateful day, the father of Pakistan’s nuclear programme is contemplative.

The tit-for-tat nuclear tests still evoke their fair share of fiery debate, both at home and worldwide, but Dr Abdul Qadeer Khan calls the development of the atomic bomb by Pakistan and India a “mixed blessing” – insisting that, though weapons, the warheads actually bar the two sides from going to war. The reference to the detente via mutually assured destruction is not a new argument for apologists.

Dr Khan recalls that he wasn’t exactly exuberant that day, since celebrated in Pakistan as Youm-e-Takbeer, because he and many others knew that Pakistan could have tested at any time after 1983, and effectively already had the bomb even without the actual test ground test in 1998.

But Pakistan did test on May 28 – 17 days after India first conducted theirs.

Delhi’s decision to test for a second time – the first time being in the ’70s – set the wheels in motion for a frantic couple of weeks. Dr Khan recalls those heady days only in general detail – given the continued sensitivity of the matter (which was not lost on us given the high security surrounding and monitoring of his house even after the passage of all this time).

Pakistan tested a mere 17 days later – but Dr Khan still seems displeased, almost as if he wished the reply could have come even sooner, possibly even the next day. He takes care to assert that it would have been possible had he been given even a couple of days’ advance warning – blaming the Gen. Jehangir Karamat-led security apparatus of the time of being caught unawares.

“You (Karamat) claimed ISI men are sitting in Pokhran (the area of India’s test site) who are very much familiar with the Indian nuclear programme. But you couldn’t tell us India is going to test the atom bomb?” Khan recalls his reaction during the Defence Cabinet Committee meeting held soon after Indian test.

The world was buzzing in anticipation. Obviously, he said, many attempted to pressure Pakistan not to test. But, he added, there were many Muslim countries who contacted him saying they “wanted to see Pakistan a nuclear power.”

“There was so much pressure on Pakistan not to test its bomb but leadership of Pakistan had taken right decision at the right time and decided to go ahead.” Dr Khan recalls being feted by ambassadors of a number of countries the evening the test took place.

The felicitations aside, many questions were asked about need to test and invite the world’s ire, when you already knew you had a bomb effective cold-tested bomb.

The tests themselves, and the sanctions that would follow, however, proved to be only the beginning of Pakistan’s concerns. In later years, accusations of global nuclear proliferation hit the state, as did charges of an unsafe nuclear arsenal that could fall into the ‘wrong hands’.

Dr Khan eventually appeared on state television in 2004 and ‘admitted’ that the proliferation ring did indeed exist, but was run by him and him alone. His “confession” of having acted alone and his apology still remains mired in suspicion, but it helped absolved the Pakistani state and other sensitive institutions – made easier since Pakistan had become a key ally in the war on terror.

But Dr Khan now reneges on that ‘confession’ but hesitates to speak of the details of the accusations.

“I never indulged myself in such illegal activities,” says Dr Khan– claiming that he had simply taken the fall because of the national interest, and the fear that there would be a concerted effort to reverse Pakistan’s nuclear programme.  He recalls that Chaudhry Shujaat Hussain, chief of the Pakistan Muslim League-Quaid (PML-Q) and then the most influential politician around given his association with then military ruler Gen Pervez Musharraf, had “approached him personally” and “requested” him to do this to ensure the safety of the programme.

Regarding the safety of Pakistan’s arsenal, Dr Khan is even less reluctant to talk. “Since 2001, I don’t know anything about Pakistan’s nuclear programme… but I believe it’s in safe hands and going on well.”

The detachment in no way reflects in his surroundings.

The road leading up to Dr Khan’s home, located in a scenic area of the capital, at the foot of the Margallas, on Hill Road, is heavily barricaded. Entrants are checked and questioned, and heavily scrutinized. Though the area in front of his house is heavily forested, but still has barbed wire running through it towards the foot of the hills.

The entry into his actual house is through another located on the right of his bungalow, which contains metal detectors and a group of men on a table with unflinchingly watchful eyes.

Clearly, Dr Khan is no ordinary citizen or even just a national hero living a free retired life. The stifling restrictions in place around him are almost like confessions of guilt – on the part of both him and the state.

Despite the suffocating “security”, Dr Khan seems to try and live a normal life.

His house is more homely, almost to the extent of being apologetic for all the troubles borne by visitors outside. The heavy presence of Quranic ayaat on almost every wall of the house, and on all four of the room we sit in, are conspicuous. Dr Khan speaks of a more structured life now – a far cry from the limelight of over a decade ago – spent with his wife, and occasional dinners for his friends. The convert world of the weapons programme has now been replaced by a non-government organisation – Society for the Advancement of Community, Health, Education and Training (SACHET) Pakistan.

Meanwhile, while the father of Pakistan’s nuclear programme weighs his limited options, the nation ‘celebrates’ another Youm-e-Takbeer under the shadow of a crisis that remains unresolved 14 years down the line.