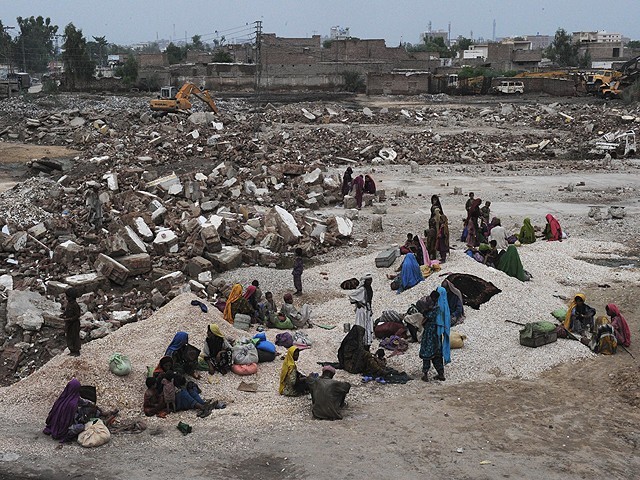 A breach in Raini Canal near Lathan area, allegedly caused by armed men from Ubaru area in Ghotki district of Sindh, flooded around 10 settlements in the Rahim Yar Khan district early Wednesday morning.

Among others, these settlements included Lathan, Chak no 217, Kahr and Dasti Sangla along the Punjab-Sindh border. The residents of these areas told The Express Tribune that following the breach, allegedly ‘made by supporters of PPP MNA Mian Mitha’, three men got injured in armed clashes between the PPP MNA’s men and people from the Punjab side of the border who put up resistance. They said that both groups patrolled the area around the canal until dawn.

Talking to the media on Wednesday, Makhdom Syed Ahmed, the PML-F provincial president, condemned the incident. He added that he had earlier requested the authorities concerned in Sindh to increase the water flow in Guddu from 960,000 cusecs to 117,000 cusecs.

Qaim Ali Shah, the Sindh Chief Minister, however, denied that the breach was caused due to human interference. He said that no one from Sind’s side caused any damage to the bank of Raini canal. The breach, he said, could have been caused due to water pressure in the canal.

In the wake of floods in the district, citizens face a spiralling price hike in Dera Ghazi Khan after the supply of daily use items was suspended. DG Khan has lost ground link with other cities and this has affected the supply line of consumer items.

Hoarders and black-marketeers are actively exploiting the situation. There is major shortage of medicines in the city. People here have to pay Rs1,400 instead of the routine fare of Rs100 for shifting patients to Nishtar Hospital in Multan. Petrol prices also rose artificially. In some areas, fuel was sold for Rs200 per litre instead of Rs68. In addition, there is a shortage of fruits, vegetables and other items that the residents require as Ramazan starts.

CNG stations have also increased their rates since gas is the only fuel easily available in the city.

A majority of the city’s population moved out of the city in view of threats of more floods.

According to an estimate, almost 70 per cent locals have evacuated the city. All markets shut down and the people who stayed back faced a lot of problems in getting daily use items.

Flood affectees have complained of various skin, respiratory and stomach-related diseases while in urban areas, people have been facing acute shortage of edibles.

In district Mianwali, the level of River Indus is exceptionally high with a rising trend observed at Chashma and Kala Bagh. 700,000 acres of land have been flooded. In the district of Teera, 5,000 people have been affected by flood out of a total population of 13,000.

According to details owing to prevailing torrential rains across the country, floodwaters entered the Khewra salt mines. The mines were closed after the water-level reached two feet.

The labourers of the salt mines said that the exits had been closed and if the authorities concerned did not take immediate action, the mines could be severely affected.