Design­ers lay down the law.
By Hani Taha
Published: May 23, 2012
Tweet Email 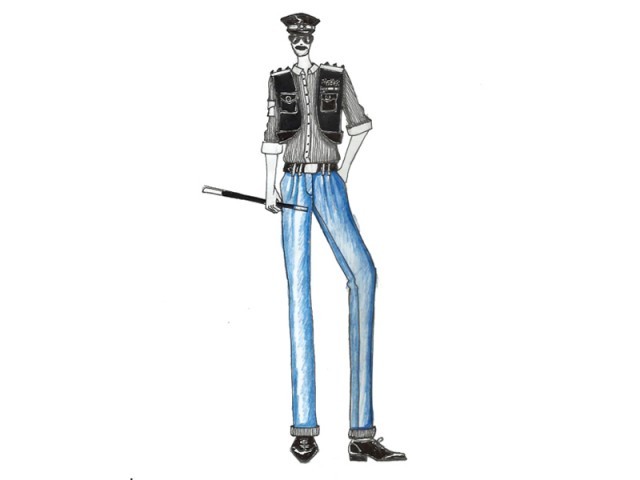 Exactly two months ago, when spring began descending into odious summer, the local police candidly declared that their characteristic grumpiness was not a personality trait intrinsic to their job but was in fact brought on by the dark colours of their uniform. Thus given that fashion has become pervasive in Pakistan in the last few years, The Express Tribune picked on some of fashion’s exciting new talents to redesign the police uniform. While we were hoping the designers would show their funky and bohemian flare, often spotted in their collections on the ramp, the sketches show a different and rather mature approach.

“I wanted to make it very simple since it is a uniform and requires practicality. Instead of the typical black though, I have a white and lime printed shirt. White works best for men because the weather is mostly sunny and warm in Pakistan. I have added a waistcoat with pockets which is not only fashionable, but will also prove useful to hold all their arms,” explains Mahmood. However, he adds that one can’t be completely fashion-centric because most policemen are older and experimental designs appeal to youngsters more. The designer, who is a fan of denim, has suggested nontreated denim for the pants. “Denim would give a cool feel to the overall look. The whole point is to make the typical uniform interesting and presentable. Also given the popularity of films like Dabanng, policemen are also viewed as icons.”

“This is my vision of how I want to see a policeman. I have used white for the pants not just because it repels heat but because the colour symbolises purity and power. We all expect the police to be this agent of fairness and justice and also expect them to have authority,” states Saleem. The designer has used turquoise, which is supposed to balance out the look since it is a neutral and fresh colour. “I wanted them to feel good about themselves yet not lose their strong image,” says Saleem.

“I have given the cops cargo pants in poplin cotton instead of twill fabric that is typically used. The cotton is lighter and makes for ease of movement in the summer. Overall, I have retained the blue details of the current uniform but used white as the base,” states Pardesy. For the top, the designer has suggested a polo t-shirt in 60/2 mercerised cotton fabric, which is basically a mix fabric that is easy to wash and wear and doesn’t dull out even after multiple washes. “The polo also gives a formal feel to the uniform and will keep the men cooler yet give them the air of authority. And the best part is that it is extremely cheap to make,” he adds.

“Whenever I think of the Pakistani police, the associated emotion that the term ignites is fear. Yet, as a fashion designer when I visualise the police I think of a sleek and smart look. I wanted to therefore go for a modern, minimalistic look that every police man can carry off,” says Ali. The designer states that since Pakistani police comes from all classes, he chose not to be too experimental with design. “The look is very simple. The cotton under-shirt is in an off-white colour and the upper jacket is dull green with 3D pockets, along with the necessary police monograms. The trousers are grey instead of black and are paired with long boots,” concludes the designer.

“I was thinking of the ancient subcontinental silhouettes of an angharkha, but wanted to make something modern with a twist of history in it. Since it’s so hot in Pakistan, the pants are airy from the hip but tight from below to give a slightly fashionable look,” says Ali. A cool wool is used for the gloves to repel heat and the scarf is added to absorb perspiration. The designer adds, “I also wanted to give the police men solar hats in two layers that create a vacuum in between for air supply.” The colours used in Ali’s creation are very light and the designer has used grey instead of white, “since white gets soiled easily in this dusty weather”.