Court marriage: Daring to say ‘I do’ in court

Court marriage: Daring to say ‘I do’ in court

Civil servic­e weddin­g are more than just a financ­ial soluti­on for some couple.
By Saba Imtiaz
Published: May 15, 2012
Tweet Email 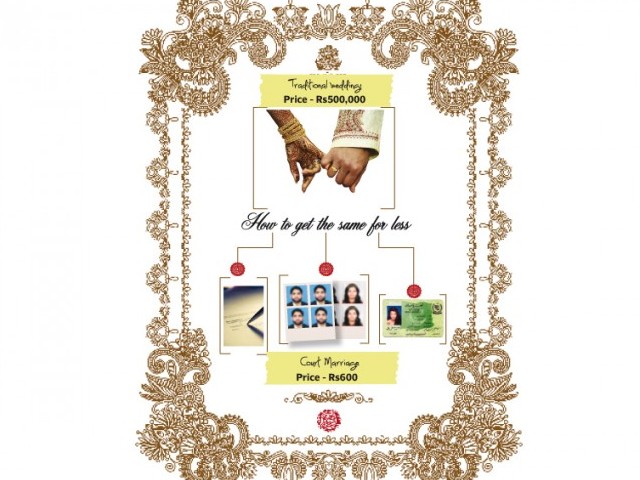 Civil service wedding are more than just a financial solution for some couple. DESIGN: ESSA MALIK

Court marriage: the word is whispered at family gatherings and proclaimed loudly in old Bollywood films.

But at the district and sessions courts in Karachi, a ‘court marriage’ is a routine affair and a surprisingly hassle-free one, at least on paper. It also costs far less than what it would to feed hundreds of wedding guests. The paperwork mainly involves paying the fees for a nikah, buying a copy of an affidavit and stamp paper. At the Malir District and Sessions Court, a wedding costs Rs600 and takes a couple of hours.

Often considered a last resort for couples whose parents may not approve of their plans to wed, or an option for those who can’t afford to pay hundreds of thousands of rupees in wedding festivities, a court marriage involves a few basic steps.

For starters, explains lawyer Mohammad Sharif Khanzada, a woman must sign an ‘affidavit of free will’ that states that she is of sound mind, an adult and is not being coerced into marriage.

“This statement is important,” Khanzada says. “Often when girls leave their home, their parents file a First Information Report (FIR) that they have disappeared and claim that they left with cash and jewellery. In this affidavit, the girl has to declare that she did not leave with anything, so later the couple is protected against accusations of theft.”

The girl also needs to submit proof of her age: a copy of her Computerised National Identity Card or a birth, education or medical certificate will do.

This documentation and three photos of the bride and groom are given to the Justice of Peace, who records an additional statement by the girl, explaining her reasons for registering her marriage with the court. A cleric registered by law to perform nikkahs is called in and after the ceremony is performed with four witnesses in attendance, the cleric will write on the nikkahnama that this was done in the care of the justice of peace.

Abdul Razzak Abbasi has been a justice of peace at the Malir district and sessions court for nearly three years and has seen numerous couples walk in and out of his shoebox of an office. They have often eloped or escaped to Karachi from other districts. He relies on the support of police personnel at the courts and the Al Falah police station to ensure that angry relatives do not barge in.

There have been near misses. Once, five minutes after a couple from Shaheed Benazirabad were legally wed, Abbasi learnt that the groom’s brothers had brought policemen from Katti Pahari to get a hold of the couple.

Others were not as lucky. A couple from the Gabol clan, who were related, were killed by their families nine months after they attempted to register their marriage with Abbasi. “The nikkah registrar hadn’t arrived, and the family amassed outside. Even though the couple was taken into police protection, I learnt that they had been killed.”

Khanzada recalls several fights breaking out at the court after angry parents discovered their children are eloping. “Sometimes they’ll slap the girl, sometimes the boy,” he said.

Engaging a lawyer for additional support can take the cost to Rs5,000 or even Rs10,000, depending on the lawyer’s profile. Abbasi says lawyers tend to scare a couple into believing that they could be charged with Zina and thus need legal representation. There appears to be no way to calculate the total number of marriages being registered at Karachi’s city court. Abbasi says the number is going up – in the first two weeks of April, he registered 12.

There appears to be no anonymity to the process. Abbasi and Khanzada both said that if the couple’s relatives approach them, they will show them the records. “Often they are concerned that the girl has been killed or kidnapped,” Abbasi says. “But if the couple has only been married for a day; I try and distract them so they have a chance to escape.”

When Mohammad Mujahid decided he had to get married in court, he first did a ‘survey’ at the City Court. “I went a week before and found out what the procedure was.”

A lawyer explained that often there are police and CID officials roaming around and they ask all sorts of questions, so it is best to have legal representation.

The lawyer gave him a time and then he went with his bride to the court.

The lawyer presented them before a local magistrate who separately recorded their statements. Then the lawyer took them to a qari who performed the nikah.

And so, even though the procedure is much simpler than that of a traditional wedding, it does have exactly the same end result.

That I am the deponent of this affidavit as such am fully conversant to the facts stated herein.

That I am about _ years of age, adult, major and capable of understanding of what is good and what is better for my life, as such I have a right to lead my life with my own choice for my well being.

That I want to marry a person with my own choice who will allow me to live in good atmosphere and whose name is MR. __ S/O ___ Adult, resident of _____.

That I came in court to swear this affidavit of my own freewill without any coercion or undue influence or any type of pressure from any corner.

That nobody kidnapped, enticed or abducted me to perform my legal right which has been guaranteed by Muhammadan Law.

That I have come to court for marriage with my own wish and if any person/persons lodge/report FIR against MR.____ S/O _______ the same should be consider as fake/bogus.

That I have not taken any kind of cash, gold or any other precious articles, when I was leaving my parental house.