Intere­st will be around Rs10.6b on certif­icates worth Rs80b.
By Shahbaz Rana
Published: May 12, 2012
Tweet Email 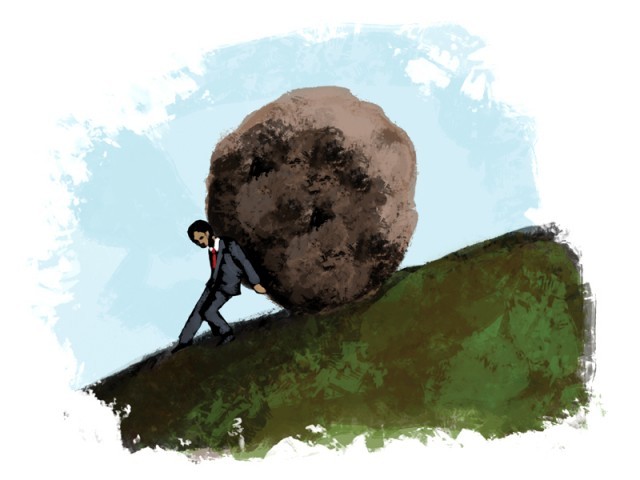 UNENDING: Rs350b to Rs400b is the circular debt of the country. ILLUSTRATION: JAMAL KHURSHID

Electricity consumers will now pay the cost of inefficiencies of the government, as the authorities have planned to pass on roughly Rs10.6 billion to the consumers on account of mark-up on the debt instrument that it wants to issue to raise Rs80 billion for unclogging the power system.

The government will not bear the cost of Term Finance Certificates (TFCs) – the debt instrument – to be issued to raise funds, as the interest cost will be charged from the system, said Finance Secretary Abdul Wajid Rana on Friday.

He was speaking in a meeting of the National Assembly Standing Committee on Finance. The meeting had been called to discuss budget proposals but most of the time was consumed in discussing the power crisis. The government has decided to float Rs80 billion worth of TFCs for partially eliminating the circular debt, estimated in the range of Rs350 to Rs400 billion.

Rana said the TFCs will be issued by the Central Power Purchasing Agency that will recover the cost “through the system”. He said the TFCs, backed by the Oil and Gas Development Company (OGDC), will release Rs300 billion in the system, largely addressing the circular debt issue.

The secretary said the mark-up on the TFCs has not yet been finalised. A finance ministry official working on the transaction said the cost will be Karachi Interbank Offered Rate (12.5%) plus 0.5 to 1%. This translates into Rs10.6 billion per annum.

The official, however, said the transaction will transfer CPPA liabilities to OGDC having no implications for the consumers and claimed that the mark-up will be paid out of recoveries made by power distribution companies.

In the last four years, the government has tried several times to resolve the circular debt issue through temporary measures like providing subsidies and creating more debt to retire previous debts.

“A permanent solution demands something bigger than such steps,” said Arif Aziz Shaikh, a member of the National Assembly.

These days, the unannounced load-shedding of 18-20 hours has crippled life in both rural and urban areas, prompting mass protests in Punjab.

The government has utterly failed in addressing the root causes of the circular debt, which are gap between determined and notified tariffs, collection falling far behind billing and failure to control line losses.

The difference between determined and end-consumer tariff has again peaked to Rs4.05 per unit, said Wajid Rana. Owing to stay orders given by courts, around Rs90 billion on account of fuel price adjustment surcharges is stuck in the system, he said.

Rana said the Economic Coordination Committee (ECC) of the cabinet will approve a summary for issuance of the TFCs and the instrument will be issued outside the budget having no implications. It seems these will have to be taken on the budget if not this year may be next year, as is the practice by the government to show deficit at a lower side in a particular year.

Earlier, the government had issued roughly Rs160 billion TFCs but that could not resolve the chronic debt problem as it left the major causes unaddressed. It has so far taken Rs550 billion on its books in the last two years. In addition to that, it swapped Rs160 billion debt with banks, but to no avail.

Rana said the government has so far released Rs119 billion in subsidies on account of price differential during the current fiscal year. The amount does not include subsidies of Rs325 billion given in the previous year.

Separately, the unabated load-shedding also took over normal agenda of the Public Accounts Committee (PAC) that was scheduled to take up audit objections of the Ministry of Water and Power.

PAC Chairman Nadeem Afzal Chan made bureaucrats responsible for the crisis, saying they did not perform their jobs and failed to reduce line losses and theft. “Instead of burning effigies of politicians, people must burn effigies of bureaucrats,” said Chan.

Tug of war: Ministries differ over incentive package for IPPs