Suicid­e attack in Bajaur is foreta­ste of what will transp­ire in region after US, Nato forces leave Afghan­istan.
By Editorial
Published: May 6, 2012
Tweet Email 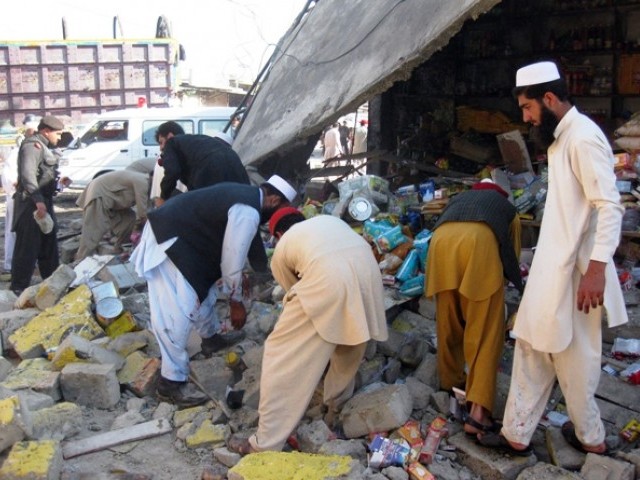 Security officials examine the site of a suicide bombing in Khar, the main town of Bajaur district, near the Afghan border on May 4, 2012. PHOTO: AFP/FILE

Tehreek-e-Taliban Pakistan (TTP) leader Hakimullah Mehsud has declared that he avenged the 2006 death of an al Qaeda commander by killing the Levies’ Quarter Master Fazle Rabbi in Khar, the headquarters of the Bajaur Agency, on May 4. But in doing so, he also killed 26 innocent citizens and wounded 76. Bajaur is the most unfortunate tribal agency because it is next to Kunar, the Afghan province where al Qaeda first made its home.

In 2006, a series of happenings triggered a war in Bajaur which went on till 2010, forcing large sections of the population to leave their homes and become refugees. This was ironic as Bajaur happens to be the smallest tribal agency with the largest population of almost a million. It was rendered prosperous because of its expatriate workers in the Gulf states. In the past, it has also been considered for inclusion in the ‘normally’ administered territory of Khyber-Pakhtunkhwa together with neighbouring Malakand. But like Malakand, it was allowed to become hostage to Sufi Muhammad’s Tehreek-i-Nifaz-i-Shariat-i-Muhammadi (TNSM).

It soon became an attractive rest and recreation spot for al Qaeda warriors — which usually meant marrying local women — including its top leadership. In 2006, the Pakistan Army attacked Damadola in Bajaur to hunt down al Qaeda operatives. The controversy that followed this operation — which had caused collateral damage —sounds like the Lal Masjid affair, with falsehood becoming a weapon in the media rhetoric against the army. The truth is that al Qaeda number two, Ayman al-Zawahiri — who it has now emerged was already the number one after having deposed Osama bin Laden — frequented Bajaur to meet his wife and children there. He had married a woman from the Mohmand tribe who, along with her children, lived with her father. He in turn was beneficiary of a generous handout. The same year, in 2006, Pakistan paramilitaries killed the Syrian-born Marwan al-Suri in an encounter on the Kunar-Bajaur border.

A Mohmand cleric, Maulvi Faqir Muhammad arose as the al Qaeda-backed leader of the Taliban in Bajaur, who has escaped capture for the last six years, although it was rumoured earlier this year that he may have been killed. He is an important commander with approximately 3,000 warriors under his wing and is expected to fight the post-withdrawal war in Afghanistan. In August 2008, the army launched Operation Sherdil against him to stop the Taliban movement to and from Kunar. The terrorists were ousted from the agency by 2010 but, like warlord Fazlullah of Swat, Maulvi Faqir is able to make hit-and-run raids into the area. Bajaur is far too strategically important for al Qaeda to abandon. In the coming battle, this will be the funnel through which our warriors will cross over to fight the Northern Alliance.

Maulvi Faqir has been difficult to eliminate because of his alliance-making dexterity: he is aligned to Mullah Omar and al-Zawahiri. There are other terrorist outfits in Bajaur that owe similar allegiances and are at the beck and call of Maulvi Faqir. Since 2007, the Taliban are there together with the remnants of TNSM. But the Jaish-i-Muhammad is there too, headed by Qari Ali Rehman, who will unite against the Pakistan Army despite his differences with Maulvi Faqir. The Harkatul Jihadul Islami, which was involved in the Islamabad Marriot Hotel blast, is also active in Bajaur,

In the hornets’ nest of Bajaur — created in part by the media’s negative portrayal of the Damadola operation — are present two Uzbek groups as well. All the renegade terrorists of Pakistan are hiding in the Malakand-Bajaur area from where they can easily escape into Kunar to join the grand muster of al Qaeda’s foot soldiers. The suicide attack in Bajaur is a foretaste of what will transpire in the region after the US and Nato forces leave Afghanistan. As Pakistan officially predicts, the ensuing war in Afghanistan will seriously affect the normalcy of life from ‘Lyari to Giari’, igniting the internal combustion of sectarian violence in parallel to the ‘fundraising’ efforts by the Taliban through kidnappings, jailbreaks and bank dacoities.